“That Super Soldier program was like an elite program.” 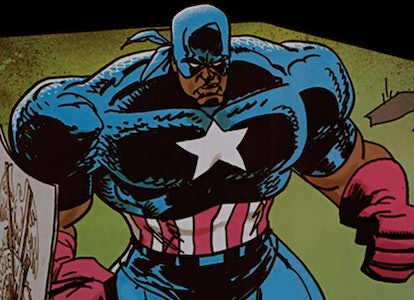 “Who gets to be Captain America?” It’s the question that underscores every punch and smash throughout The Falcon and the Winter Soldier.

Through the introduction of Isaiah Bradley, played by Carl Lumbly, the truth of “Captain America” was darker and harsher than even Steve Rogers ever knew. It seeded deep resentment in Bradley, who scoffed at Sam Wilson and anything to do with Captain America.

But in a recent interview with Lumbly, the actor states his belief Isaiah Bradley actually did want to be Captain America once upon a time. Here’s how it all breaks down.

What Happened? — On April 27, Vanity Fair published an interview with Lumbly on its podcast Still Watching. The 69-year-old actor, also known for roles in TV shows like Cagney & Lacey, Alias, Supergirl, and as the voice of “Martian Manhunter” in the animated Justice League, told Vanity Fair what he thinks Isaiah meant when he told Sam Wilson that “no self-respecting Black man” would ever want to be Captain America.

“For me, and in my understanding of Isaiah, Isaiah is talking to himself,” Lumbly said. “It’s almost a self-deprecation.”

Lumbly then said Isaiah resents the role of Captain America because he wanted it: “Isaiah wanted to represent his country at the highest level he could.” Lumbly also gave new information about the Super Soldier program that wasn’t present in the actual text of The Falcon and the Winter Soldier.

“That Super Soldier program was like an elite program. A) you had to qualify in any number of ways, but B) [you] had to be motivated.”

“I think ambition was always a part of what Isaiah was doing. And I think game recognize game. He looks at the Falcon and sees both the potential and realization of excellence, which anybody who has a standard can appreciate, and he also sees the possibility for all the disappointment that would come if you reach too far and fall short ... James Baldwin said, ‘If you can face it, you can bear it. If you can bear it, you can change it. That’s what I see in Isaiah.’”

A Complicated Legacy — While The Falcon and the Winter Soldier has been criticized for unclear and convoluted politics, the notion that Captain America is irremovable from the sacrifices of Black men has resonated with audiences as the Marvel Cinematic Universe matures in its “Phase 4.” That a mascot and metaphor for America isn’t just an all-powerful soldier to dispatch against HYDRA and Thanos, but was perfected because a generation of Black people were deceived in their military service, is a heavy thing to learn about a cultural icon.

While there are razor-sharp criticisms against The Falcon and the Winter Soldier and its central premise buckling under its own weight, the show was at least a big swing from the MCU, even if it didn’t knock it out of the park.

For Lumbly at least, there is something poignant about passing something onto generations. (Though Sam and Steve seemed close in age, don’t forget, Steve Rogers was technically in his 90s.)

“The world continues to move and change,” said Lumbly, “and progress continues to be made at least in this country. I feel lucky saying that today.”

The Inverse Analysis — It’s hard to think about The Falcon and the Winter Soldier as one of Marvel’s very best offerings. But it can certainly be argued it is one of Marvel’s more ambitious efforts that put systemic racism and the abhorrent treatment of America’s veterans front and center in, of all things, a Disney streaming series with an action figure line.