“Marco has led me down an inward-looking path.” 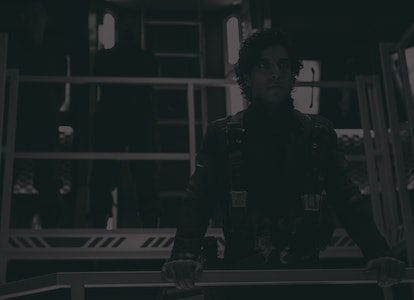 The terrifying cliffhanger of The Expanse Season 4 saw Earth facing a catastrophic threat on an inconceivable scale. After enduring centuries of systemic abuse from Earth and Mars, the inhabitants of the asteroid belt — known as Belters in the world of The Expanse — are ready to flip the power dynamics of the solar system. Led by the radical revolutionary Marco Inaros, the Belt is prepared to use force to assert itself as the new seat of power in the dawning age of interstellar travel.

As is fairly common among fictional and historical villains, Marco doesn't see himself as "the bad guy" in this story. Actor Keon Alexander tells Inverse that stepping into the shoes of the character — genocidal ambitions and all — has helped him make sense of 2020, a year that's laid bare the problems of systematic inequality in our own world.

"Marco has led me down an inward-looking path that has really helped me in 2020," Alexander says. "It's strange, I know, and I didn't expect it either!"

Playing the Belter radical in Seasons 4 and 5 of The Expanse has given Alexander a new perspective on issues that preoccupied him throughout his childhood, adolescence, and adulthood.

"I became awake to social injustice at a pretty young age, and it became very close to my heart and close to my life's mission," he explains. "The way that I decided to go about addressing those ills was very outward for a very long time. I was very into activism, academia, and finding avenues sociopolitically to address these things."

It's through Marco that he's come to understand the intricate connections between the political and the psychological — how society shapes the inner lives of individuals, and vice-versa. The cast and crew of the Amazon series filmed Season 5 months before the Covid-19 pandemic began, and before the social justice protests of this past summer. Yet The Expanse's remarkable knack for translating contemporary cultural issues into a sci-fi setting feels uncannily up-to-date, even though Marco's personality and the events of Season 5 are largely based on 2015's Nemesis Games, the fifth book in the science-fiction series written by James S. A. Corey.

"Everything that he's addressing is so perfectly timely," Alexander says. "Even as we were shooting last year, we were already having these discussions at our rehearsals and gatherings — getting riled up with the subjects of injustice, oppression, the dispossession of people, and systemic problems,"

"But as time went on, I was drawn to the psychological roots of what's led me as a person of color to feel oppressed, or the trauma that I've experienced. So it's going inward on a journey of healing and self-reflection, in a way that tied perfectly into 2020."

Marco's actions have a staggering human toll on The Expanse, and the extremity of his methods make him a tough character to root for. While he's unlikely to snag a father of the year award anytime soon, he's part of a broader movement on the series this season, which sees the principal characters largely separated from each other for long stretches of time. Fan favorites like the four key members of Rocinante crew, Martian marine Bobbie Draper, and stalwart Belter captain Camina Drummer are often all by their lonesome. While there's no shortage of action or bombastic setpieces, we learn a lot more about the series' ensemble cast this time around.

For Alexander, that inward-looking frame of mind carried over from his time filming the latest batch of episodes into the strange, lonely months of the summer and fall of 2020.

"With all that's going on, with all the isolation of the last several months, the number-one thing we're being faced with is ourselves," he says. "We all have to look in the mirror and really look deep within, because you can't distract yourself in the same way as you could before. You can't run and hide, and the greatest journey is inwards."

New episodes of The Expanse Season 5 debut Wednesdays on Amazon.

More like this
Entertainment
5.6.2022 6:00 PM
Outer Range’s “truly epic” finale is more than just time-travel twists
By Ryan Britt
Entertainment
5.13.2022 10:00 AM
Upload renewed for Season 3. How much longer can Amazon’s best show last?
By Eric Francisco
Entertainment
5 hours ago
Kate Siegel says Netflix’s Fall of the House of Usher is “like nothing anyone has ever seen”
By Dais Johnston
Related Tags
Share: