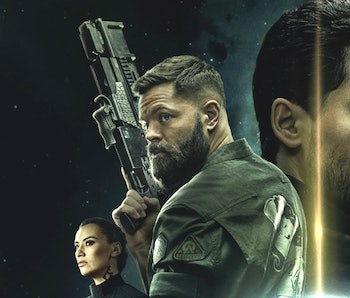 Season 5 of The Expanse finished shooting before coronavirus shuttered film and TV production worldwide, but Amazon hasn't made any announcements about a release date for new episodes of the binge-worthy sci-fi series. Last season debuted in mid-December 2019, there's reason to suspect Amazon might drop new episodes of The Expanse Season 5 a bit earlier, given the show's popularity on the streaming platform and the ongoing pandemic. In a recent interview with Inverse, series star Wes Chatham couldn't tell us when to expect Season 5, but he did share some fascinating insights about the cast and showrunners's ambitions for Season 6 and beyond.

The cast and crew of The Expanse are a chummy bunch. That's abundantly clear if you follow any of the actors on social media, or have tuned into panels for the show at San Diego Comic-Con. Not only are they tight with each other, they're all really into sci-fi and being part of The Expanse.

"We've all gotten to be really good friends, really close. One of the things we all have in common is that we're all fans of the genre. We all feel the same way about being able to be a part of this," Chatham said. "So as fans, we get together and talk about shows that we've loved, and how disappointing it is when you're really invested in something and it doesn't stick the landing, if it doesn't maintain the quality level as it did in the beginning."

Chatham didn't mention any shows in particular in the context of failing to stick the landing, but it's hard not to think of 2019's poorly received final season of Game of Thrones, which abandoned nearly a decade of intricately plotted character growth in favor of rapid-fire CGI spectacle. The cast and crew of the Amazon series clearly don't want to do that.

"We always thought, wouldn't it be amazing, wouldn’t it be great if we can really stick the landing and deliver a story that we would love to see. That's definitely something we sit around and talk about," Chatham added. "My hope is that before we get to 2030, we have completely told the whole Expanse story that includes all the novels through nine. I would love to be able to complete the full story and tell The Expanse at its highest expression."

Back in October 2019 at New York Comic Con, Chatham's co-star Steven Strait told Inverse that the cast and showrunners that the foundation of the show's past and future success was rooted in keeping the story as close to the source material – the soon-to-be-completed nine-novel series by James S.A. Corey – as much as possible.

"It is essential that we stick to this meticulously plotted story... the minute you veer away, suddenly that’s all lost, and then you can’t really go back," Strait explained. "We are always aware that these books are beloved for a reason. We’ll always stick to the to the plot because it’s exquisitely done.”

A substantial time-skip in the seventh Expanse novel, Persepolis Rising, will present a unique test for any future seasons of the show. "The kind of jumps that you're talking about – it’s an interesting challenge and something that I've never seen on on film before. That adds another dynamic that's just fascinating about The Expanse," Chatham noted..

Amazon has not yet renewed the series beyond Season 5, though there's little cause for concern at the moment. Season 4 was one of the streaming service's most-watched shows following its December debut, and Amazon made its last renewal announcement in July ahead of the debut of Season 4. Still, Chatham's comments suggest the team behind The Expanse is eager to rise to the occasion should they get the green light for Seasons 6 and beyond.

"It’s a rare, rare thing where the cast, the crew, and the writers are working as hard now than they've ever worked. Usually when you start to get into later seasons, you start to relax a little bit. But not this show," he told Inverse. "Particularly after we were saved, there's a certain kind of gratitude, but also a chip on our your shoulder. We believe this thing is amazing, and now we're getting an opportunity to really show it."

Seasons 1-4 of The Expanse are available to stream now on Amazon.