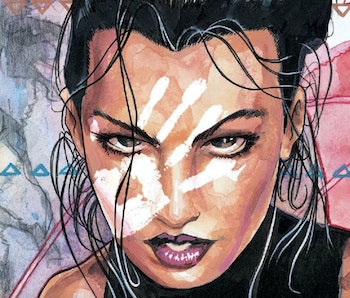 Of all the original series announced and confirmed during the 2021 Disney+ Day celebration, one that was likely less recognizable to casual subscribers was Echo.

A spin-off from (and chronological follow-up to) Marvel’s Hawkeye, Echo is one of the pre-announced titles that superhero fans knew the least about heading into Disney+ Day, but it’s already shaping up to be one of the studio’s most interesting Phase Four projects. The series will place a spotlight on its titular, groundbreaking Marvel anti-hero and will even bring back certain characters from Netflix’s short-lived Daredevil TV series.

With all that in mind, here’s everything we know so far about Echo, from its cast to its important Daredevil connections.

When will Echo be on Disney+?

Disney+ has not yet set a specific premiere date for Echo. However, Marvel has announced that it is expected to premiere on Disney+ sometime in 2023. The series began filming in May 2022.

Who is in the Echo cast?

Echo will be led by Alaqua Cox, who will reprise her Marvel Cinematic Universe role as Maya Lopez/Echo following her debut as the character in last year’s Hawkeye.

Additionally, The Hollywood Reporter revealed in July 2022 that both Vincent D’Onofrio and Charlie Cox are set to reprise their Daredevil roles as Wilson Fisk/Kingpin and Matt Murdock/Daredevil in Echo. D’Onofrio’s Kingpin famously shared a few scenes last year with Alaqua Cox’s Maya in Hawkeye. Charlie Cox, meanwhile, briefly reprised his role as Matt Murdock in Spider-Man: No Way Home.

What is the plot of Echo?

Echo is set to explore Maya Lopez’s “origin story” and will pick up with the Hawkeye character when her “ruthless behavior in New York City catches up with her in her hometown.” The series will follow Maya as she is forced to “face her past, reconnect with her Native American roots and embrace the meaning of family and community.”

The show’s official plot synopsis confirms that it will begin sometime after the events of Hawkeye, though, there are reasons to believe that it will also include flashbacks to moments that took place before that Disney+ series. As a result, it is still unclear whether or not Vincent D’Onofrio’s Wilson Fisk survived his violent confrontation with Maya in the Hawkeye Season 1 finale.

Additionally, while Marvel has yet to confirm any official details about Charlie Cox and D’Onofrio’s roles in Echo, THR has reported that Cox’s Matt Murdock will be looking for a “former ally” in the Disney+ series. The Weekly Planet has claimed that said ally will be none other than Krysten Ritter’s Jessica Jones. Whether that’s correct or not, it is still unclear if the versions of Murdock and Fisk that Cox and D’Onofrio will play in Echo are the same ones they played in Daredevil.

How can you watch Echo?

Echo will be a Disney+ exclusive series, which means only the streaming service’s paid subscribers will be able to watch its episodes.

Is there a trailer for Echo?

As of this writing, Marvel has yet to release an official trailer for Echo. However, anyone desperate to see Alaqua Cox’s Maya Lopez in action can always revisit her episodes of Hawkeye.