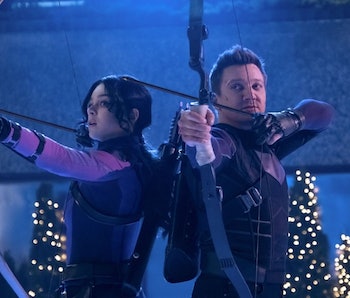 In six episodes, Hawkeye Season 1 gave the Marvel Cinematic Universe a charismatic and kick-ass new heroine in Kate Bishop (Hailee Steinfeld). While the series chronicled Clint Barton’s (Jeremy Renner) race to deal with the consequences of his past actions, it also introduced Kate as a worthy partner — or possible successor — to Hawkeye. Therefore, it only makes sense for us to wonder what’s next for Kate and Clint, and if there will be a second season.

Here is everything you need to know about Hawkeye Season 2, from its release date to its cast and trailer.

Spoilers for Hawkeye Season 1 ahead.

If Hawkeye Season 1 is popular enough, the show could return for Season 2.

What is the Hawkeye Season 2 release date?

Hawkeye Season 2 does not have a release date because there are no official plans for a second season. If Marvel renews Hawkeye for Season 2, it may be a while until it’s released.

Hawkeye Season 1 was filmed in December 2020 and premiered in November 2021. Production will need to start anew for Season 2, which means Kate and Clint’s return might not happen until early 2023 or later.

Where can I watch Hawkeye Season 2?

If there is a Hawkeye Season 2, it will likely premiere on Disney+. For now, you can rewatch the first season on the Disney streaming platform.

Who will be in the Hawkeye Season 2 cast?

Based on what happened in the Season 1 finale, we can expect Hailee Steinfeld and Jeremy Renner to return as Kate Bishop and Clint Barton. Other cast members who could return include:

Alaqua Cox might also appear in Hawkeye Season 2 as Maya Lopez, although Cox will soon be starring in Echo, an upcoming Marvel series on Disney+. The show’s big bad, Vincent D’Onofrio’s Kingpin, could have survived his stand down with Maya and might be around for Hawkeye’s second season.

What is the Hawkeye Season 2 plot?

There are many different directions that Hawkeye Season 2 could go. Kate Bishop and Clint Barton both have substantial storylines in Marvel Comics that could inspire where the series heads next. We explore what those avenues could be in the following article: “Here’s when we’ll see Kate Bishop next.”

If Hawkeye does get a Season 2, it will likely focus on Kate. Whether she will still be partnered up with Clint or taking up the Hawkeye mantle herself remains to be seen. We should expect to see the fallout between Kate and her mother as Kate deals with the emotional and financial repercussions of her parents’ actions. And if Kingpin is still alive, Kate will likely have to face him again. If Season 2 focuses on Clint, we might also learn more about Laura’s past as Agent 19.

Is there a Hawkeye Season 2 trailer?

Since Marvel has not confirmed Hawkeye Season 2, there is no trailer for it. But you can rewatch the trailer for Season 1 in the embed below.