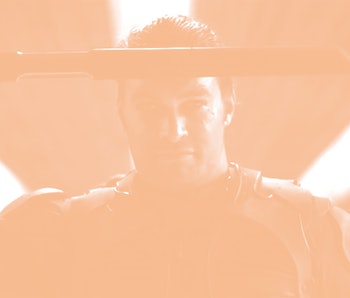 Over the years, Dune has earned comparisons to everything from the Lord of the Rings to Star Wars. But Denis Villeneuve’s upcoming adaptation of the beloved Frank Herbert novel will likely be nothing like a run-of-the-mill fantasy epic. And the reason why is sure to shock moviegoers later this year.

Dune isn’t a “hero’s journey” narrative. The heroes triumph in very specific ways, but the light at the end of its dark narrative tunnel isn’t what you think.

Recently, Dune star Jason Momoa revealed what he thought of an early screening of the film. Speaking to Jimmy Fallon, Momoa said, “It’s a very adult movie... but so beautiful.”

This comment is telling. Even though Dune is reportedly rated PG-13, audiences might want to buckle up for a fairly dark, unrelenting take on the sci-fi epic. Here’s why. Spoilers for the Dune novels, and possibly the 2021 movie, head.

Dune will reportedly be rated PG-13, which suggests a tonal darkness in line with films like Star Wars Episode III: Revenge of the Sith or Indiana Jones and the Temple of Doom. In terms of graphic violence, that’s perhaps true.

What’s in your apocalypse bag? Vote in our reader poll!

But in light of Momoa’s comments, it makes sense to expect that Dune will be the bleakest sci-fi epic perhaps ever — at least for a film of its size. Even the David Lynch-directed Dune ended on a somewhat triumphant note, changing events from the novel so Paul Atreides can make it rain on the desert planet of Arrakis.

But Villeneuve’s Dune will be dark for a fairly obvious reason that fans of the book have likely already guessed. The best character in the story, not to mention the coolest, will almost certainly be killed at some point during the film, brutally so. If you haven’t read the books, look away before this next spoiler.

In the novel Dune, Duncan Idaho, a master swordsman for House Atreides, is killed by Harkonnens after Duke Leto is betrayed and attacked in his new fortress on Arrakis. This is a pivotal turning point that arrives within the first third of the novel. The death of Duncan occurs mostly “off-screen” in the book, but make no mistake: Duncan does die. This will almost certainly happen in the movie, too.

You may be saying, “Who cares?” Isn’t Duncan like the Obi-Wan Kenobi figure to Paul Atreides’ Luke Skywalker? Well, no. Not really. Duncan Idaho dying halfway through Dune, or toward the end of the movie, would be more akin to Han Solo dying while rescuing Princess Leia from the Death Star. In other words, it will be a bummer. It will make us feel sad. It will make the world of Dune feel unsafe, and that’s the point.

Momoa told Kimmel he saw this movie with his kids. And when he mentioned that, he winced, saying that it was “the first time I got to see something like that with my kids.”

Given that Duncan is killed in the novel, it stands to reason the Momoas might have just sat through an early screening in which the actor’s character is murdered on screen. This isn’t Aquaman, after all. Remember when Boromir takes all those arrows in The Fellowship of the Ring? It’s a good bet Duncan’s death will be like that. But unlike Boromir, Duncan didn’t do anything wrong. He’s a hero who sacrifices himself to save the people he loves (and those he works for).

Dune is the anti-Star Wars

Although in later books, Duncan Idaho is brought back to life through various clones called “gholas,” it’s not like his spirit is going to be guiding young Paul into the (potential) Dune sequels. Death is permanent in Dune in a way it often isn’t in other fantasy or sci-fi epics.

Yes, certain characters can inherit the memories of others who’ve died. And yes, Duncan is pretty much the only main character who makes appearances in all the books. But his ultimate fate in Dune is rather brutal.

The fighters of House Atreides wield knives and swords, not because other weapons don’t exist but because they feel like such intimate tools are right for inflicting fatal blows. The philosophy of the Dune books when it comes to action is quite similar. Whenever something violent or explosive takes place, it’s for a realistic reason. Unlike Star Wars, Dune is not a sci-fi epic overrun with pew-pew laser bolts. That’s probably what Momoa means when he said it’s an “adult” movie.

Well, that and his (likely) onscreen death.