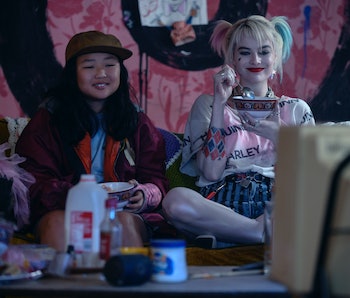 The first big superhero movie of 2020 is here. Birds of Prey (and the Fantabulous Emancipation of One Harley Quinn) from director Cathy Yan is a new chapter in the DC Extended Universe's ongoing story of Gotham City. So the question that follows all superhero movies is relevant here too: Does it have a post-credits scene?

Here's a spoiler-free guide to check out before you see Birds of Prey for yourself.

And we're not kidding here: The answer may actually surprise you.

In theaters Friday, Birds of Prey is the next movie from DC Films. Set after the events of 2016's Suicide Squad, Harley Quinn (Margot Robbie) breaks up with her main squeeze, the Joker, to become her own gal. Surrounding herself with an ensemble of DC's most kick-ass female heroes, including Huntress (Mary Elizabeth Winstead), Cassandra Cain (Ella Jay Basco), Black Canary (Jurnee Smollett-Bell), and Detective Renee Montoya (Rosie Perez).

Being a major superhero movie, of course you want to know if there's a post-credits scene. We won't spoil the specifics, but no, there isn't a post-credits scene. There is, however, a little something extra that does happen after the credits. But it's not a scene. It isn't one or more actors citing scripted lines performing direction. But it's something It's, like... okay, remember Halloween from 2018? It's like that.

Again, no spoilers here, but even after Birds of Prey, there is plenty to look forward to in the future of the DCEU. Later this June, a sequel to 2017's Wonder Woman, titled Wonder Woman 1984, will once again star Gal Gadot as her Amazonian warrior princess as she finds herself engulfed in the last leg of the Cold War.

Next year in 2021, The Batman from director Matt Reeves will reboot the Dark Knight for the big screen in a movie with still-questionable status in the "DCEU." The film is slated for June 25. A short two months later, on August 6, James Gunn's The Suicide Squad will hit theaters as a sequel to/soft reboot of the 2016 film.

And on December 22, 2021, Dwayne Johnson will star as Black Adam, the anti-hero demigod of the DC Universe who often clashes with Shazam (formerly known as Captain Marvel). A sequel to Shazam! is slated for April 1, 2022. The list goes on.

But that's the future. For now, there's Birds of Prey, a really fun and funny movie that really lets Margot Robbie shine as Harley Quinn alongside some even more exciting actors having a ball. It's just a good time, and that's all it's really about.