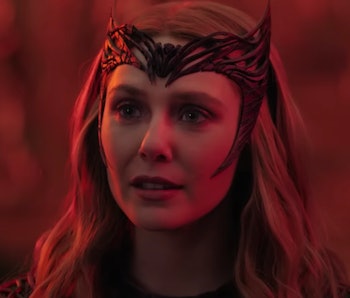 If there’s one thing Doctor Strange in the Multiverse of Madness proves to be undeniably true, it’s that Wanda Maximoff (Elizabeth Olsen) is the most powerful character in the Marvel Cinematic Universe. The Doctor Strange sequel pits Wanda against a number of powerful Marvel Comics characters, including Black Bolt (Anson Mount), Professor X (Patrick Stewart), Stephen Strange (Benedict Cumberbatch), and Captain Marvel (Lashana Lynch), and she beats them all without breaking a sweat.

There are moments in Multiverse of Madness where Wanda ranks as the most formidable and terrifying villain in MCU history. Marvel’s Doctor Strange sequel therefore has fans returning to an MCU debate that’s been raging ever since 2018’s Avengers: Infinity War.

The Theory — On Reddit, one MCU fan recently took the time to ask if the Wanda who wreaks so much havoc in Multiverse of Madness could have single-handedly defeated Thanos (Josh Brolin) even after he’d acquired the Infinity Stones. Most of the MCU fans who responded seemed to agree that, yes, Wanda could have defeated Thanos at the end of Infinity War if she’d truly tried.

One Redditor referenced a brutal moment in Multiverse of Madness by noting that Wanda could have simply erased Thanos’ fingers in the same way she did Black Bolt’s mouth, which would have prevented him from using the Infinity Stones.

Hindsight is 20/20 — At the end of Avengers: Infinity War, Wanda does manage to do what none of her fellow heroes can, and single-handedly slows Thanos down long enough for her to kill Vision (Paul Bettany) with her magic. Thanos quickly uses the Time Stone to reverse Vision’s death, and Wanda is too distraught over having to kill the love of her life to get much of a chance to actually fight Thanos in the film.

In 2019’s Avengers: Endgame, however, Wanda faces off against Thanos for a second time and nearly kills him all on her own. She brings the Mad Titan so close to death that he’s forced to order an attack that’ll hurt both his enemies and his own forces. Ever since then, Marvel fans have wondered just how much of a chance Wanda could have had at stopping Thanos in Infinity War if she wasn’t so preoccupied with having to protect Vision.

Based on how easily she manages to defeat everyone who gets in her way in Multiverse of Madness, it seems safe to say that a proper fight between Wanda and Thanos probably wouldn’t have gone well for the latter regardless of whether he had any Infinity Stones.

The Inverse Analysis — There’s a lot of uncertainty surrounding Wanda Maximoff’s future in the MCU after Doctor Strange in the Multiverse of Madness. Her fate is left ambiguous, although many fans believe she’ll show up again sooner rather than later.

It’d probably be a good thing for the MCU’s heroes if she does return. Despite the many heinous decisions Wanda makes in both Multiverse of Madness and WandaVision, she’s still the most powerful ally that the Avengers or any other superhero team could ever hope to have on their side. At least, there aren’t many other characters in the MCU that fans would agree could have single-handedly taken on an Infinity Gauntlet-wielding Thanos.