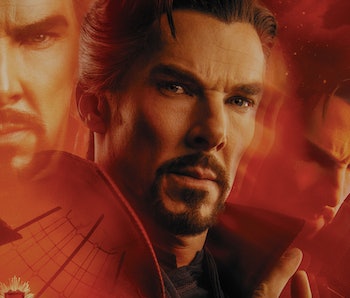 Marvel did Mordo dirty. Played by Chiwetel Ejiofor, the powerful sorcerer who broke bad in the original Doctor Strange was barely a footnote in this 2022 sequel — at least for the variant we met back in 2016.

Thanks to recent interviews, we know Doctor Strange in the Multiverse of Madness at one point included an early scene in which Mordo confronted Wanda (and lost his life), but no one has actually gotten a look at that scene. Until now.

While Mordo plays a prominent role in Doctor Strange, he has a much smaller part in Multiverse of Madness. We never even see the MCU’s original Mordo in the new movie. Instead, we only meet Mordo of the parallel universe Earth-838. This Mordo becomes the Sorcerer Supreme, and like his multiversal counterpart, he isn’t a fan of Strange either.

So what about Earth-616 Mordo? The movie doesn’t offer much, but we know that Doctor Strange 2 originally opened with a scene where Mordo visits Wanda, only to discover she’s become the Scarlet Witch. In this deleted scene, Wanda murders Mordo, quickly establishing both her fearsome strength and her capacity for evil.

That didn’t happen in Doctor Strange 2, which technically means Earth-616 Mordo is still alive. However, the special ScreenX poster for Multiverse of Madness offers a glimpse into this alternate reality.

It’s hard to be sure, but if you squint this really does look like Mordo visiting Wanda’s evil lair as depicted in Multiverse of Madness. As far as we know, this scene was never filmed, so it’s unclear where this image comes from. Still, it seems to confirm that the scrapped interaction would have been one of the scariest parts of the Sam Raimi movie.

While it’s disappointing to learn that an exciting scene never made the cut — especially one that would help resolve a lingering question from the original Doctor Strange — on the plus side, this means Earth-616 Mordo is still out there somewhere.

With Stephen set to return (either in Doctor Strange 3 or as part of a Secret Wars crossover event), perhaps 616 Mordo can finally get the screentime he deserves.