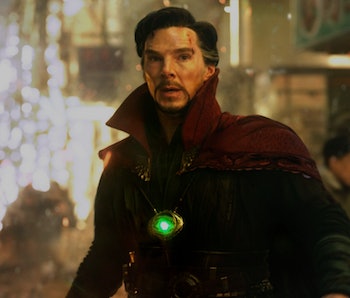 The Doctor Strange of 2022 is a confident sorcerer (even if he’s no longer supreme), but that wasn’t always the case. Back in 2016, when Benedict Cumberbatch first joined the Marvel Cinematic Universe, we watched the origin story of a cocky doctor tossed into a world of magic he barely understands.

One scene in particular from Doctor Strange emphasized his status as a very confused guy trying to do magic spells. But in the process, it set up a lingering MCU mystery that was only just solved six years later.

Doctor Strange and the Brazier of Bom'Galiath

In Doctor Strange, the titular neurosurgeon faces down an evil sorcerer played by Mads Mikkelsen. In one climactic scene, an untrained Strange fights the bad guys while trying to protect the Sanctum Sanctorum where some of the most powerful magic objects in the universe are stored. That includes a large gold artifact called the Brazier of Bom'Galiath.

In that 2016 fight scene, Strange grabs the glowing Brazier of Bom'Galiath and uses it to threaten his enemy. It works for a second — until it becomes clear he has no idea how to use it. From there, the plot moves on and we never actually learn what that thing does or why it was so scary. Six years later, we finally have an answer.

In Doctor Strange in the Multiverse of Madness, Christine Palmer (Rachel McAdams) grabs the Brazier of Bom'Galiath and uses it to shoot fireballs at a pack of flying demons who are attacking Doctor Strange. So there you have it, the gold artifact is basically just a handheld fire canon. End of story — or is it?

Don’t leave yet, because a look at the comics could reveal how Doctor Strange 2 and the Brazier of Bom'Galiath set up a surprising Marvel villain.

That’s right, Mephisto! The demonic Marvel villain who everyone thought might show up in WandaVision gets a brief shoutout in the MCU movie featuring Wanda herself. Coincidence?

Let’s back up slightly. In the comics, Doctor Strange uses the Brazier of Bom'Galiath for a very different purpose. In order to enter Mephisto’s realm during Mighty Thor #443 (1992), he casts a spell. However, because it’s such a major spell, he has to use the Brazier to stabilize it, which he does by lighting a fire in its top. As long as the fire burns, Strange says he’ll be fine.

In other words, not only does the Brazier of Bom'Galiath shoot fire, but it could be the key to reaching Mephisto — assuming the mysterious character ever actually shows up in the MCU, that is.

Doctor Strange in the Multiverse of Madness is currently in theaters.