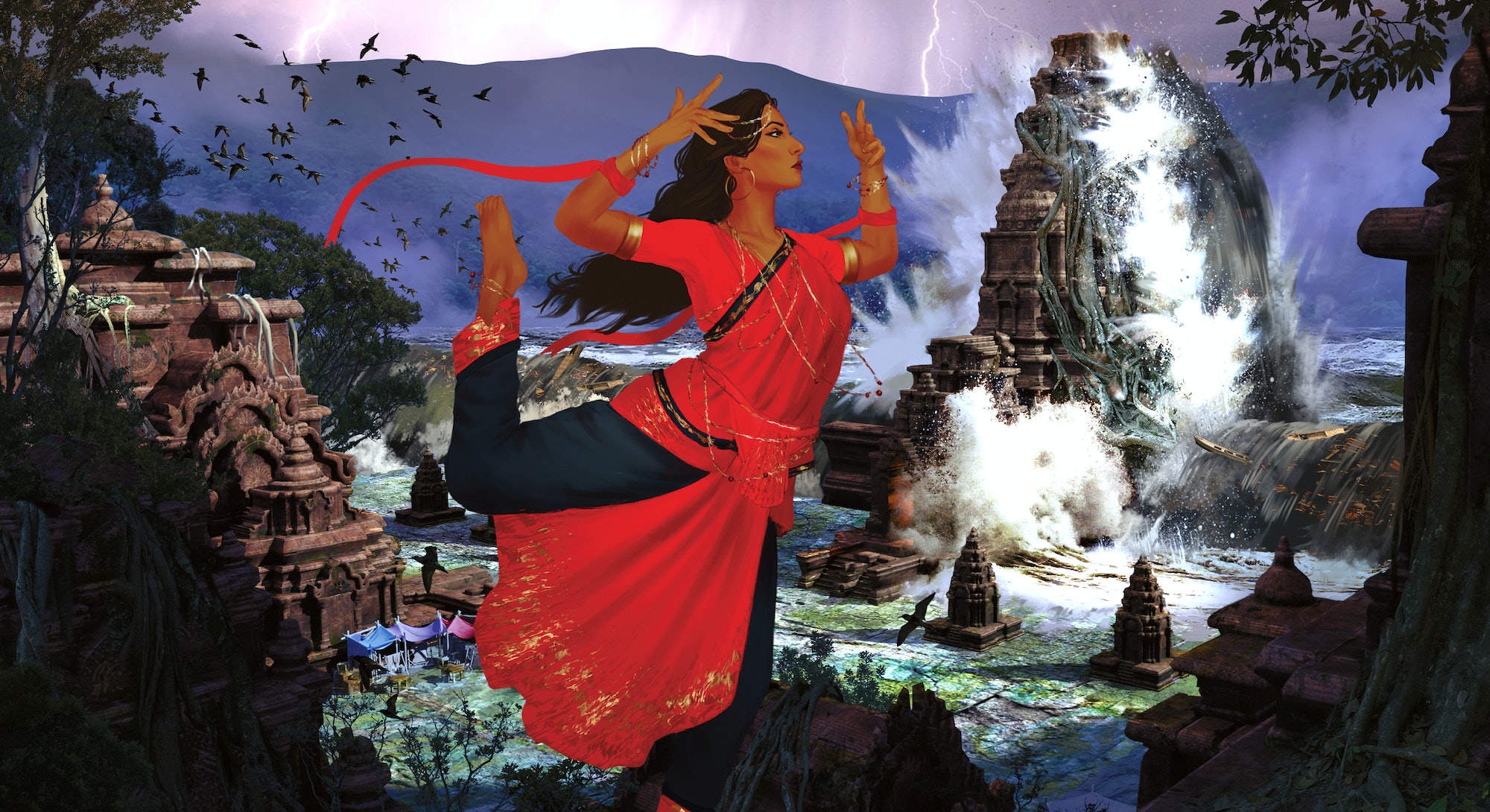 Deep in the mists of the Ethereal Plane shines the Radiant Citadel, a hub between worlds where adventurers from across the multiverse converge in the first true cultural melting pot in Dungeons & Dragons history.

Like Candlekeep Mysteries before it, the upcoming Journeys Through the Radiant Citadel is an anthology. 16 black and brown writers created 15 unique human civilizations and 13 short adventures to explore myths and legends that have been passed down through generations — both within the D&D multiverse and here in the real world.

Built upon the ancient corpse of an unknown primordial being, the bustling Radiant Citadel also serves as a spiritual nexus for these cultures. In the Preserve of the Ancestors, wandering spirits form sentient crystal clusters that become Dawn Incarnates, mythical beings that pass on ancient knowledge from eons past to each new generation. A tone of optimism, hope, diversity, and peace permeates throughout the book, particularly amongst the Shankhabhumi.

Speculative fiction author Mimi Mondal penned the level 9 adventure “In the Mists of Manivarsha” and created the nation of Shankhabhumi as a reflection of ancient cultures of the 6th and 7th centuries in what we now know as Bangladesh and the West Bengal state of India. As such, the Shankhabhumi Dawn Incarnate assumes the form of a Moonstone Water Lily, a ubiquitous flower with many uses that grows in the swamps and rivers of those real-world regions.

“An overarching theme on my mind while creating Shankhabhumi was geology, rivers, and how life thrives in the parts of the world that are still being created,” Mondal tells Inverse. “Common wisdom would suggest such geographically volatile places would be sparsely populated, but Bengal is, in fact, one of the most heavily populated regions in the world.” The adventure’s key themes all relate back to ecological challenges and how sometimes, nature holds the greatest mysteries of all.

For an in-depth look at the historical and mythological inspirations behind this adventure, read on.

This book’s Project Lead Ajit George has described the overall Radiant Citadel story as solarpunk or hopepunk. What does that mean for your story?

Shankhabhumi definitely has some solarpunk fantasy vibes to it. The people of the land have a delicate but symbiotic relationship with their environment. They not only survive, but they thrive by finding a way to build off of the rivers and the land. My biggest priority while writing Shankhabhumi was to build four city-states that are distinct enough to be recognizable yet share a deep underlying resemblance because of the unique nature of the land.

Tippurika, Ashwadhatu, Sagorpur, as well as Manivarsha are all different versions of "riverine" cities, and my second big priority was not to relate them to each other by war. The land, the rivers, and the swamp forests of Shankhabhumi are too unpredictable to successfully wage war. Challenges in this world emerge mostly from its ecosystem, and nearly none of them is inherently benevolent or malevolent — they're just nature.

Journeys Through the Radiant Citadel puts a strong emphasis on cultural harmony at large. What can you tell me about Shankhabhumi and its connection to other Radiant Citadel cultures?

On the other hand, ancient Classical writers like Plutarch, Ptolemy, Virgil, and Pliny the Elder have mentioned a nearly mythical seaport city called Gangaridae on the eastern banks of a very large river which has largely been identified with this part of the world. It’s partially the inspiration for Sagorpur.

While the geography doesn't follow that of the real world, Shankhabhumi occupies a similar cultural position here. It's a still-emerging land abounding in natural resources, fronted with a mercantile port city that welcomes traders, scholars, tourists, and adventurers from everywhere else. The land is benevolent to immigrants as well, who are most common in Sagorpur but aren't unheard-of in the remote cities of Tippurika and Ashwadhatu either.

Journeys Through the Radiant Citadel feels like the collision of fantasy with sci-fi. How did that influence your storytelling here?

An overarching theme on my mind while creating Shankhabhumi was geology, rivers, and how life thrives in the parts of the world that are still being created. Common wisdom would suggest such geographically volatile places would be sparsely populated, but Bengal is in fact one of the most heavily populated regions in the world. Though I've spent nearly two-thirds of my life there, I've never stopped being fascinated by this detail.

I won't entirely call Shankhabhumi science fiction only because the mechanism of the world doesn't use traditional science-fiction tropes as much as traditional fantasy tropes, but is there really much difference between the two anymore? I like the term eco(-logical) fiction, which I think can be applied to a number of works that don't all come from the same tradition.

What are some of the unique challenges associated with developing a 9th-level adventure?

I worked with the co-leads, Ajit and Wes, on deciding the level of the adventure. Part of it was decided by the overall rhythm of the book, and the adventures and cultures that came both before and after mine.

I know they wanted to make sure that if every adventure in the book was played from beginning to end, they’d be interesting variations in not only the geography and culture, but the story beats. And I think the greatest challenge was simply ensuring that it wasn’t too easy for player characters to figure out what was happening, the real mystery behind the series of events that triggered the plot of the adventure.

What can you tell me about the Shankhabhumi Dawn Incarnate?

The Dawn Incarnate for Shankhabhumi is the Moonstone Water Lily. You don't see moonstones featured prominently in this adventure because gems in Shankhabhumi used to be mined near the lost city of Manivarsha, whose name translates to "land of jewels."

The water lily is the most conspicuous flower on this land, growing abundantly in the swamps and the rivers. The poorest of the poor can adorn themselves with the flowers, boil and eat the roots and stems, roast the seeds for snacks, but it's also permissible to bring an armful of water lilies as offerings to the riverine temple or a particularly comely bloom to court the beloved of your heart. The water lily is never a magic object. It's simply a token of everyday beauty and joy in Shankhabhumi.

What aspect of your story is the most personal to you?

Like many other people of color my age, I grew up reading books by white/Western authors. Many of us struggled to understand the contexts, social norms, and other details in many of these books, but something that also made me feel like an outsider was how some authors wove in little personal references, tuckerizations, etc. in their works, which didn't necessarily hamper my reading of the book if I didn't understand them, but provided an additional layer of enjoyment for those who did.

I do this in all my fiction, and I've done it with Shankhabhumi too. The closer you are to me and my background, the more meaning you'll harvest from this world. All the place and character names have meanings in Bengali, which are fun to know but not required to play in this world. For instance, “Plabon” means flood, “Jijibisha” means the will to live, “Amanisha” means a moonlit night, and so on.

The Bhatiyali majhis are also real. You can listen to traditional Bhatiyali folk songs online, though nearly none come with translations. Then there's the even more personal level: Two of the cities are tributes to my two closest friends, a character is a nod to my sister, and there are parts of the story that would make each of my parents smile.

Journeys Through the Radiant Citadel will be released on July 19, 2022.