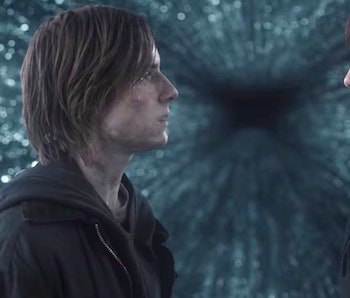 Dark's time-travel loops span multiple periods and universes in Season 3. If you're feeling lost in the weeds, you're definitely not the only one. Luckily, a galaxy-brained Dark fan on Reddit has devised a handy theory to help you decode that mind-bending Season 3 ending, and it exposes a major paradox in the triquetra knot formed by the split universes.

Warning! Spoilers for Dark Season 3 ahead!

Reddit user pavish73 shared a theory rooted in the show's own explanation of the Schrödinger's cat paradox. It explains how the final resolution of the time loops — Jonas and Martha saving H.G. Tannhaus's son Marek, his wife Sonja, and their daughter Charlotte from the car crash — simultaneously does and does not happen.

There are three "worlds" in the universe of Dark. The first is Jonas's world, the world where the events of the first two seasons occur. The second is Martha's world, otherwise known as the Alt-World, where Martha takes Jonas at the end of the second season. The third world is the Genesis world, the creation of a world without time travel and therefore without Jonas.

This theory argues when Martha and Jonas save Marek and family from the car crash, it renders their existence invalid. If that's true, then did they even exist at all? It's a bit like the Grandfather Paradox: if you go back in time and shoot your own grandfather, what happens?

As is illustrated in the diagram, the paths of timelines form a triquetra, a knot often used in Celtic symbology that consists of three overlapping loops. This symbol is shown often in Dark, such as on the Sic Mundus door found in the cave.

With this foreshadowing visible from the beginning, the creation of a third world seems like a no-brainer. However, that third loop creates an instance where Jonas and Martha simultaneously do and do not exist, forever trapped in limbo. In a way, it's almost romantic they'll stay there together for eternity.

The issue is mainly that the paradox creates a world where the car crash simultaneously did and didn't happen. While in the canon of the show it seems to have turned out okay, the remaining paradox will always remain, constantly looping in on itself in perpetuity.