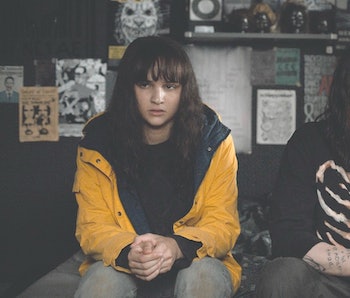 Dark Season 3 pulled off what was seemingly impossible: wrapping up two seasons of time loops, paradoxes, and alternate universes into a satisfying end. Sure, it had to focus the last two of its eight episodes to hurriedly tying loose ends, but the ends got tied, and that's a feat in itself. However, keeping all these reveals straight can be confusing. Here are some of your top questions about Season 3 answered.

Spoilers ahead for Dark Season 3.

4. What does the Dark Season 3 family tree reveal?

We only get flitting glances at the family tree inlaid in the marble of Eva's Sic Mundus floor. Above you can see a better view.

Still confused about it? Don't worry. There are countless family tree explainers on Dark's subreddit, as well as on the show's official Wikipedia page. Though, even with a road map to the families, things can still get a little tricky to parse. Let's look at the individual questions the show left unclear.

3. Who is Regina Tiedemann's father?

Regina Tiedemann, the daughter of "White Devil" Claudia Tiedemann, plays a critical role in Season 3. However, you may have missed an early reveal about her parentage.

Despite thinking her father is Tronte, her time-hopping mother actually had a dalliance with Bernd Doppler, the founder of the power plant. This makes her half-siblings with Helge, and in a way, Peter's aunt. Everything is connected.

2. Who is Tronte Nielsen's Father?

While Tronte isn't actually Regina's father, he's got paternal mysteries of his own. His father was unknown in the first two seasons. However, Season 3 revealed his dad was none other than The Unknown, otherwise known as the Cleft Lip Trio.

1. What happened to Wöller's eye?

Torben Wöller, the junior police officer who works with Charlotte, randomly just doesn't have an eye in Jonas's world. Even more curiously, doesn't have an arm in the alt-world. He's tried to explain this before, but has always been interrupted.

So, what happened to his eye? The short answer is: we don't know. If you haven't seen the last scene of the show yet, just trust that while the mystery remains unsolved, the creators address the fans' frustration at not knowing this distinct detail. That's the first rule of mystery box shows: always leave them wanting more.

More like this
Entertainment
Feb. 2, 2023
Everything Wrong with Netflix’s New Password-Sharing Rules
By Dais Johnston
Entertainment
Jan. 30, 2023
The Last of Us Episode 3 ending explained: The tragic short lives of [SPOILERS]
By Dais Johnston
Science
Feb. 4, 2023
The Weirdest Sci-Fi Apocalypse on Netflix Reveals a Controversial Field of Medicine
By Tara Yarlagadda
LEARN SOMETHING NEW EVERY DAY.
Related Tags
Share: