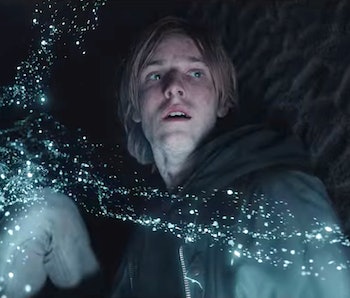 Dark Season 3 took the already complicated series to brand new heights, but it can be difficult to follow exactly what happened. In particular, that last scene seems to come out of nowhere. Add time travel and a parallel world to the mix, and it's easy to get a little lost. Here's the rundown on that last scene and two more burning Season 3 questions.

Spoilers ahead for all of Dark Season 3.

What happened in the Dark Season 3 ending?

After Jonas and Martha make the necessary sacrifice and put a stop to all time travel, many characters disappear altogether: we see every iteration of Jonas and Martha dissolve in their specific timelines, but that's it. But in Dark, everything is connected, so many other characters' existences would be snuffed out by this action.

This is never explicitly shown, but we get a good idea of the effect in the single-scene epilogue, when Regina Tiedemann holds a dinner party for her friends. They toast to the ambient tunes of "You Spin Me Round (Like a Record)" by Dead or Alive, a song shown in a 1986 segment in Season 1. The guests in attendance are Katharina, Peter, Benni, Torben, and Hannah. This is an eclectic group, but in a way they are the survivors of the time loop.

The other main adult characters have been erased: Charlotte cannot exist as her daughter Elisabeth cannot be her own mother, Ulrich cannot exist as his grandson Jonas cannot father The Unknown (also known as the Cleft Lip Trio) who then becomes Ulrich's grandfather. It's complicated, yes, but those plot holes being closed shows Dark's true attention to detail.

Of the characters at the table, it seems Peter and Benni are in a relationship, and Torben and Hannah are as well, with Hannah pregnant. However, none of these characters are wearing wedding rings. The addition of the Wöller siblings as romantic partners at least provides some closure to Peter and Hannah, some of the most unlucky characters of Season 3.

What is the Bootstrap Paradox?

The bootstrap paradox was explained briefly in the series already, but Season 3 uses the concept near constantly. The best example of a bootstrap paradox is the pfennig coin found around the neck of Mads when he shows up in 2019 way back in season 1. In Season 3, when the characters race to "fill in the gaps, they take the coin from police evidence and travel back in time to put it on Mads's body.

Where did the coin come from? It has no origin. It merely lives in an eternal time loop, going back and forth throughout time. This loop is eternal until it's finally broken by Jonas and Martha in the finale.

Who is Killian in Dark Season 3?

In the premiere of Season 3, Alt-Martha lives a life completely different to the one in Jonas's world. Her brother Mikkel is annoying, her other brother Magnus is goth now, and, most importantly, she has bangs. She goes to school in Jonas's famous yellow jacket, where she's met by her boyfriend Killian. If it felt like Killian's appearance was abrupt, that's because it was.

In a show where everything is connected, his role is surprisingly independent. He's there to sub in for Jonas in the Alt-World, and then he's gone. For Dark, that's an uncharacteristic move, but it goes to show the connection between Martha and Jonas: she ditches Killian for Jonas, as they are perfect for each other.

All three seasons of Dark are streaming on Netflix.