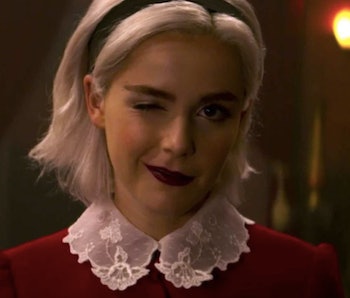 The end is nigh. Chilling Adventures of Sabrina is approaching the conclusion of its story. Netflix officially canceled the series ahead of the debut of Season 4. The new episodes will pick up in the aftermath of a pivotal decision Sabrina made at the end of Season 3, which will have major consequences for her life and the fate of the world at large.

The final season has a lot of ground to cover, including Sabrina’s battle against the eldritch terrors, ancient entities who will bring on the end of the cosmos. If you’re wondering when you can finally watch Season 4 of Chilling Adventures of Sabrina, we’ve got you covered.

Here’s everything we know about the witchy series’ final season.

When is the release date for Chilling Adventures of Sabrina Season 4?

The series’ final season will be released on Thursday, December 31 on Netflix. Whatever happens in the series finale will be something fans will have to accept because there won’t be any more new episodes in the future.

What is the release time for Chilling Adventures of Sabrina Season 4?

All eight episodes of Season 4 will go live at 3:01 a.m. ET on December 31. This follows Netflix’s pattern of releasing full seasons at once rather than going the weekly episodic structure that Disney+ and occasionally Hulu have adapted. Depending on where you live, release times may vary. If you were waiting for this week to catch up on Sabrina’s third season, now’s your chance to binge it before the last season drops.

What is the plot of Chilling Adventures of Sabrina Season 4?

Aside from Sabrina and her friends fighting off the eldritch terrors, the season will address the circumstances of having two Sabrinas. This predicament sets the stage for some potentially catastrophic events, especially as the eldritch terrors’ threat looms closer.

While Sabrina Spellman will be living her best life while attending regular high school and the witches academy, Sabrina Morningstar will be busy ruling the nine circles of Hell. Whether the pair will reconcile their differences, merge, or remain separated remains unclear. That said, having two Sabrinas should make for a more compelling arc for our favorite witch. Meanwhile, Nick Scratch and Sabrina broke up in Season 3 and it’s possible that their relationship will be revisited in Season 4.

What are the episode titles for Chilling Adventures of Sabrina Season 4?

Per IMDb, the Season 4 premiere is called, “Chapter Twenty-Nine: The Eldritch Dark.” The episode’s title suggests that the series will waste no time in tackling the threat of the eldritch terrors, which have been unleashed on the world by Father Faustus Blackwood (who wants to warp reality for himself). The trailer hinted at the arrival of several terrors, all of which will precede the Void and the end of all things. With that in mind, fans should expect each episode to possibly be named after one of the eldritch terrors. Here’s the trailer with more info!

How will Sabrina’s original ‘90s aunties factor into Season 4?

Netflix revealed that Chilling Adventures of Sabrina will see the return of Carolina Rhea and Beth Broderick, better known as aunts Hilda and Zelda from Sabrina, the Teenage Witch. While their appearance is a nice surprise, they show up for more than a simple cameo and their roles are much more important than you might think. As for why and when they will cross paths with Sabrina, that’s too big of a secret to spill.