"To let go is hard, but it's also beautiful." 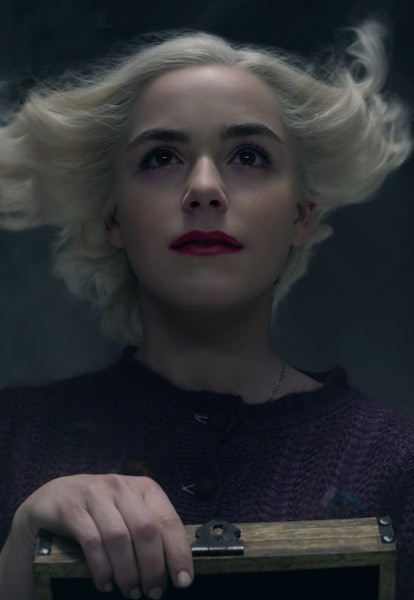 Chilling Adventures of Sabrina is coming to an end.

Sabrina Spellman, the witches coven, and her mortal friends have been through a lot over the past four seasons, even if it's only been a year in-universe. They've juggled hellish challenges and the pressures of high school with wit and magic. The fourth and final season will see Sabrina facing her most terrifying opponent yet — the eldritch terrors, ancient and powerful beings whose arrival will bring about the end of the cosmos unless the teenage witch can stop them.

After a year spent battling Lucifer, Lilith, and a plethora of other terrifying baddies, the teenage witch is calling it a day. For her part, Kiernan Shipka was impressed with the way her character’s story came to a close.

“I am satisfied,” Shipka tells Inverse of Sabrina’s ending. “There were moments where I found myself thinking, ‘Is this the ending that I want? Because this is the ending that we're getting.’ And I did. I loved it.”

“Every character has been up and down. We really took risks and did so much,” added Jaz Sinclair, who plays Sabrina’s friend Rosalind Walker. “While I would love to continue playing in this world because it's so fun, I definitely feel satisfied with where and how it's wrapping up, and all of the juicy episodes that we're giving fans.”

The series finale of Chilling Adventures of Sabrina will likely prompt a myriad of emotions from fans. The cast says it was tough on them, too. Still, Lachlan Watson — who plays Theo Putnam, Sabrina’s friend and a member of the Fright Club band — believes it’s the right time to leave the characters behind.

“The characters are probably pretty exhausted. They just need regular years [and] a break,” Watson jokes. “For the actors, we could have used a lot more time to explore and learn. We didn’t get a lot of closure, but I think our characters [did].”

TV characters often feel real, both to audiences and the actors portraying them. Shipka says it was particularly difficult to say goodbye to Sabrina, because the crafty witch has become such a big part of her life.

“You get close to these characters and when I talk about Sabrina, I'm not talking about myself playing her, I'm talking about her,” Shipka explains. “They become friends, confidants, and vehicles in which you express your emotions. To let go of that is hard, but it's also beautiful. I was forever grateful that I had Sabrina during two very big years of my life. She got me through.”

Shipka says goodbye to two versions of her character in Season 4. In the Season 3 finale, Sabrina was caught in a time-loop paradox that saw her working with an earlier version of herself to prevent the end of the world.

Instead of closing the paradox, the two Sabrinas decided to stick around and keep their situation a secret. Sabrina Spellman would live out her days as a normal teenager at Baxter High School, while Sabrina Morningstar would rule the nine circles of Hell with Lucifer. What could go wrong?

The idea of twin Sabrinas was teased as early as the series premiere, when Sabrina had a vision of two babies, identical except that one had cloven feet like Lucifer. Shipka says it was a thrill to play two iterations of her character and explore the ways in which they were different, yet the same.

“I felt like I knew Sabrina Spellman so well that I could take little bits and craft this alternate version of her. I think about who would I be if I grew up differently in a different place, and that to me is who Sabrina Morningstar is to Sabrina Spellman. Sabrina has always grappled with her duality, so to actually split Sabrina was really powerful.”

In addition to splitting up Sabrina, Chilling Adventures will also see her cross paths with Aunt Hilda (Caroline Rhea) and Aunt Zelda (Beth Broderick) from the original 1990s sitcom Sabrina the Teenage Witch. It’s a trippy, fourth-wall-breaking moment that the cast say was a joy to bring to the screen.

“We always wanted to do something with the original cast,” Shipka explains. “We wanted to cover all of our bases and this felt really full circle. We owe so much to the original show that it only felt right to have the OGs on and it was so fun.”