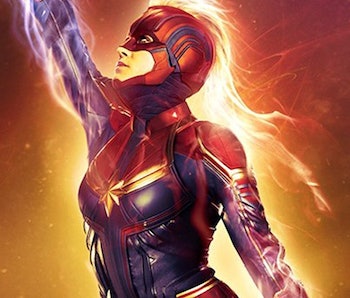 Carol Danvers is back and no longer flying solo. Brie Larson debuted in the Marvel Cinematic Universe as Carol Danvers, aka Captain Marvel, in her March 2019 solo film, marking the first time a female superhero led a Marvel movie. Captain Marvel was met with largely positive reviews, including one from Inverse, and beat its own expectations to gross $153 million in the U.S. and $455 million worldwide in its opening weekend.

Captain Marvel’s success made it seem inevitable that a sequel will happen eventually. And especially after Carol Danvers’ pivotal role in Avengers: Endgame and some big hints in Spider-Man: Far From Home that involve Nick Fury and the Skrulls, she’ll probably be a central figure in the MCU in Phase Four.

Here’s everything we know about Captain Marvel 2 (aka, The Marvels), including its title, release date, cast, and more.

When was Captain Marvel 2 confirmed?

We knew there’d be a Black Panther 2 long before it was quietly confirmed based on its commercial success. Because Captain Marvel had a gross of $153 million in U.S. ticket sales its opening weekend, a sequel seems inevitable. But yes, another Carol Danvers solo movie is officially in the works.

The first official word confirming a Captain Marvel sequel came at the end of Marvel Studios’ San Diego Comic-Con 2019 panel when the studio’s president Kevin Feige confirmed that Captain Marvel 2 was in development alongside other priorities like Black Panther 2, Guardians of the Galaxy vol. 3, Fantastic Four, and something incorporating “mutants” into the mix.

What is the Captain Marvel 2 title?

In May 2021, Marvel Studios announced the official title of the Captain Marvel sequel. The movie will be titled The Marvels. The name seems to imply that multiple people are joining Carol Danvers. And given the fact that the logo for the film contains the same stylized “S” from the Ms. Marvel logo, it seems to be hinting at some partnerships happening.

When is the Captain Marvel 2 release date?

The Marvels will release February 17, 2023. It was previously scheduled for November 11, 2022 and before that July 8. Marvel’s latest reshuffle pushes the film back to 2023.

How does the Captain Marvel ending set up a sequel?

At the end of Captain Marvel, Carol Danvers leaves the Tesseract on Earth with Goose and Nick Fury, and she flies away with the Skrull refugees aboard Mar-Vell’s Kree vessel, upgraded with a lightspeed drive. Their goal is to find the Skrulls a new home far away from the Kree empire.

They probably flew to an uncharted galaxy in search of an inhabitable planet. Danvers doesn’t return to Earth until 23 years later, but for her, it was probably much shorter — because of Einstein’s theory of special relativity. Having received the distress call from Nick Fury, Danvers rushed back to Earth and appeared at the Avengers facility shortly after Thanos’ Decimation. That’s how she was around for Endgame.

But Captain Marvel also dropped several hints about Carol’s future. Jude Law’s Yon-Rogg is still alive, having been sent back to Hala by Carol herself with a threat: that she was coming for the Great Intelligence. Not only will Captain Marvel help the Skrulls find a home, but she also has unfinished business with the Kree Empire, especially because Ronan the Accuser said he’d “be back for the weapon,” referring to Danvers.

He dies at the end of Guardians of the Galaxy vol. 1, so if Ronan and Danvers reencounter each other, it’ll have to happen between Captain Marvel and then.

What does Spider-Man: Far From Home mean for Captain Marvel 2?

Carol Danvers has a close personal connection to Nick Fury after their time as friends and allies during Captain Marvel. One of the biggest surprises in Spider-Man: Far From Home is that the Maria Hill and Nick Fury we see interacting with Peter Parker are actually a pair of Skrull aliens posing as humans. That whole time, the real Nick Fury was out in some Skrull space colony.

How long ago did this switch happen? Was Talos the Skrull impersonating Nick Fury throughout the entire known MCU? Or did this happen more recently? There’s no telling when Marvel Studios might follow up on the implications of the Far From Home ending and post-credits scene, but Captain Marvel 2 seems like a good place.

What could the plot of Captain Marvel 2 Be?

During Carol’s adventures in outer space, Captain Marvel did seemingly receive some suit upgrades, based on her appearance in the Captain Marvel post-credits scene. We really don’t know how long she was away, and this seems to imply that a potential Captain Marvel sequel could be set during her adventures with the Skrulls rather than after Endgame.

Did she successfully find a home for the shapeshifting aliens? What other kinds of cosmic threats could she have discovered out there? Captain Marvel 2 could explore just that.

Who is in the cast of Captain Marvel 2?

Naturally, Brie Larson is back at Carol Danvers/Captain Marvel. Iman Vellini will also make her film debut as Kamala Khan, a.k.a. Ms. Marvel, in the sequel. Larson had been vocal about wanting the character. And with the announcement and release of a series around Khan happening on Disney+, bringing together Captain Marvel and Ms. Marvel seems only natural.

Speaking of Disney+, The Marvels will also feature a familiar face from WandaVision. Teyonah Parris will make her film debut as Monica Rambeau, the adult daughter of the now-deceased Maria Rambeau, who appeared in the first Captain Marvel film. She is a former agent of S.W.O.R.D. and gained an impressive array of powers that allows her to absorb energy. It should be very interesting to see Monica and Carol come together, considering how much the former idolized the latter as a child.