“Jabba ruled with fear. I intend to rule with respect.” 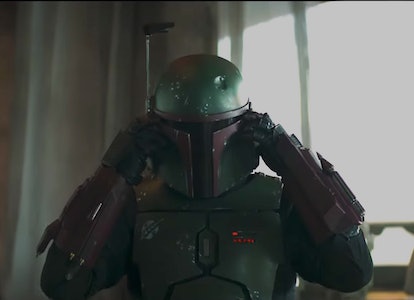 It’s been nearly a year since The Mandalorian Season 2, the last live-action addition to the Star Wars universe. But thankfully, this galaxy far away is returning with a new focus and a newer look. The Book of Boba Fett follows Temeura Morrison’s aged bounty hunter as he takes over Jabba the Hutt’s crime empire. In the first official trailer, Boba’s leadership style is demonstrated — and it’s completely different from what we’ve seen before.

Boba Fett subverts expectations from the get-go. His first line is, “I’m not a bounty hunter,” and it’s clear he intends to shift his career from killer-for-hire to (benevolent?) crime lord. Though he’s replacing Jabba the Hutt in the power structure, Boba knows what it’s like to report to someone tyrannical, and he intends to be different.

A new type of Boba Fett

“Jabba ruled with fear. I intend to rule with respect,” Boba says while making a proposal to unite Jabba’s former captains. “Why talk of conflict when co-operation can make us all rich?” He’s not ruling a crime empire, he’s creating a crime conglomerate with an eye on giving the workers a voice.

While “crime syndicate, but not corrupt” may not sound like the most exciting premise for a Star Wars series, it’s revolutionary for the franchise. All throughout Star Wars history, we’ve seen characters solve problems with lightsabers and blasters. Diplomacy is the thing that put Palpatine in power.

But Boba seems to be changing that. He’s creating a seedy underbelly that isn’t seedy. Instead, it’s ethical. He says he’ll listen to those with problems and find a mutually beneficial way to solve them.

If that requires some bloodshed, that’s just how it is. Boba’s just here to remind Tatooine that fighting isn’t always the answer, just sometimes.

It’s unlike anything we’ve seen in Star Wars, especially live-action. It doesn’t mean that Boba is hanging up his blaster just yet, but he’s taking over for Jabba and needs to delineate himself from the Hutt rulers’ very large shadow as soon as possible. He isn’t your average crime lord. He’s been on the other side of a deadly contract and wants to treat everyone fairly.

The new trailer is a far cry from the Boba Fett we met in The Mandalorian Season 2, a grizzled warrior whose only focus was revenge. It’s surprising to see him turn a new leaf in his solo series, though it should make for a more interesting narrative than just: Boba Fett murders everyone on Tattoine.

Boba Fett could also have massive implications on Star Wars as a whole. Considering Boba’s connections to Fennec Shand and Din Djarin, who are both bounty hunters themselves, this could be the beginning of a sea change of hired hands. Maybe in the future, instead of mercenaries, those in conflict can hire mediators. Mediators who aren’t afraid of getting their hands dirty if things get bad.

The Book of Boba Fett premieres on Disney+ December 29.