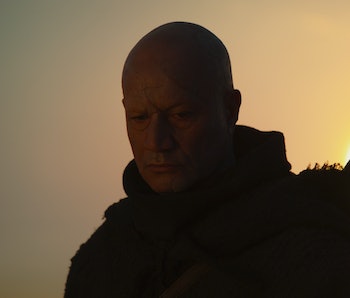 Take that, Sarlaac! The Mandalorian Season 2 brought Boba Fett back from the dead. Temuera Morrison made his triumphant return to the world of Star Wars at the end of the season premiere. While it’s unclear exactly when he’ll appear again, Boba Fett’s comeback may be setting the stage for his very own spinoff series.

In The Mandalorian’s “Chapter 9: The Marshal,” Din Djarin teams up with Cobb Vanth in a bid to kill the Krayt dragon, a sand creature that has been terrorizing the local town of Mos Pelgo for years. In return for Din’s help, Cobb promised to hand over Boba Fett’s iconic armor. As Mando leaves Tatooine, a lone figure watches as he speeds off into the sunset. That figure is revealed to be none other than Boba himself, miraculously having survived his fall into the Sarlacc Pit during Star Wars: Return of the Jedi (now without his armor).

It’s likely Boba will reappear once more in a future Season 2 episode. Whether or not he does, we’re likely to follow his galactic adventures in The Mandalorian spinoff series being eyed at Disney and Lucasfilm. In February, former Disney boss Bob Iger revealed plans to introduce characters in The Mandalorian before giving them their own series.

With all that in mind, here’s everything we know about the Boba Fett spinoff series, including its release date, plot, and cast.

When is the release date for the Disney+ Boba Fett spinoff show?

The spinoff does not yet have a scheduled release date. However, Deadline reports the Boba Fett series will start filming by the end of November/early December and will likely premiere ahead of The Mandalorian Season 3. If true, it means that a Boba Fett show has been in the works for a while now.

Meanwhile, The Mandalorian has not received an official Season 3 renewal from Lucasfilm and Disney, though Deadline's sources suggest that pre-production is currently underway and it will film at some point in 2021.

What is the plot of the Disney+ Boba Fett spinoff series?

It’s hard to say because details about the series are scarce at the moment. That said, it’s possible that the spinoff will at least answer the question that has been lingering on fans’ minds for a while now: How did Boba Fett actually survive the Sarlacc Pit?

The Mandalorian hasn’t offered a definitive answer on that just yet and all the big reveals about his character will probably be held until the spinoff. At the very least, the spinoff could follow Boba in the aftermath of his fall, which would potentially put the timeline of the show immediately following Return of the Jedi (Mandalorian is set five years after ROTJ).

Who is in the cast of the Disney+ Boba Fett spinoff series?

The spinoff will most likely see Morrison in the starring role. Aside from the actor’s return, no other casting news has been made official. There’s a chance that the series could bring along a couple of characters introduced in The Mandalorian (like Cobb Vanth), but we’ll have to wait and see what happens.

Is there a trailer yet for the Boba Fett spinoff series?

Not yet. Depending on when Disney+ confirms the bounty hunter’s show, that’s when we should have a better indication of when filming is expected to begin. Like with The Mandalorian, fans shouldn’t expect a trailer until at least a month and a half before the premiere date. Watch this space.