“This is my city. These are my people.” 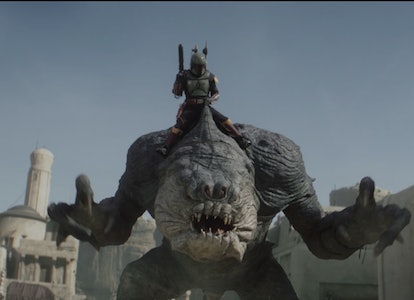 Remember when The Book of Boba Fett was about Boba Fett? The first four episodes told a laser-focused story, with all the benefits and drawbacks that come from that. Under threat from a pair of Hutt twins, he came out on top and they simply left after realizing their claim to Jabba’s throne was invalid.

They didn’t leave Boba empty-handed though. The twins left him a rancor as tribute, along with a handler played by the inimitable Danny Trejo. But what did this gift lead up to? Only what could be one of the most important moments in Mandalorian history.

In the rip-roaring Book of Boba Fett finale, Boba cashes in every favor he has in order to fend off the Pyke Syndicate and their mercenary, Cad Bane. But once they reveal two scorpenek droids, it’s clear not even that’s enough.

Boba says they need reinforcements, and Mando replies “From where? You’ve run out of friends.” It’s technically true — Boba doesn’t have more friends on Tatooine, and he has no shortage of enemies, but he does have an incredibly loyal pet. Sure enough, the rancor is able to tip the scales, albeit with a bit of a tantrum controlled by Grogu.

This moment is significant for several reasons. The first is the most obvious: Boba Fett on top of a big creature begs a comparison to the bounty hunter’s animated adventure in the Star Wars Holiday Special, where he rode some sort of elephant/dinosaur monster (this explains his line when he first encountered the rancor, “I’ve ridden beasts ten times its size”).

The rancor also brings to mind a Mandalorian prophecy we heard the Armorer discuss. Legend has it the new leader of the Mandalorians will ride a mythosaur. But mythosaurs are, as far as we know, mythical. A rancor seems like the next best thing. With this reveal, did Boba Fett establish himself as the next leader of his kind? And what does this mean for the upcoming third season of The Mandalorian?

The final significance of Boba’s wild ride is pure storytelling symbolism. The hero mounting a great steed is a long-running trope, especially in sci-fi and fantasy. Just look at Harry Potter riding Buckbeak, or Daenerys Targaryen flying into battle on a dragon for the first time.

Boba Fett is no longer just a bounty hunter. He’s a Mandalorian, a leader, and he’s not going to let corporate bullies undermine his power when he’s suffered so many losses already. The rancor scene is proof of just how much power he has, and how much power he’s willing to wield.