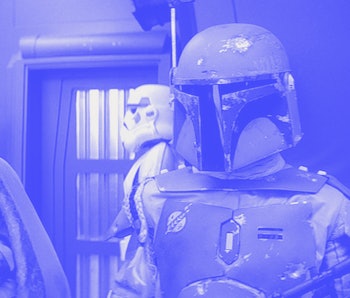 Just Boba? Let’s face it, the trailers for The Book of Boba Fett are underwhelming. As cool as it is to see Temuera Morrison and Ming-Na Wen kicking ass in the next streaming Star Wars TV series, we can’t help but ask if the show is only going to feature Boba Fett and Fennec Shand cleaning up the Star Wars underworld. Like the trailers for The Mandalorian in 2019, it feels like The Book of Boba Fett is hiding something big. Back before we met Mando, we had no idea Baby Yoda was coming. So what are they holding back this time?

A new interview with director Robert Rodriguez and producer/writer Dave Filoni seems to suggest that The Book of Boba Fett will have non-stop cameos, and also span the entire Star Wars saga. Wild speculation ahead!

The case for flashbacks in The Book of Boba Fett

Although we’ve assumed that the majority of The Book of Boba Fett will, like The Mandalorian, take place nine years after the Battle of Yavin, there’s nothing stopping the series from doing extensive flashbacks to other moments in Boba Fett’s life. Fett never took his helmet off in the classic films, so it would be very easy for Lucasfilm to facilitate time jumps. No deepfakes. No CGI de-aging. Just leave his helmet on! Like Darth Vader crashing Rogue One, Boba Fett can appear in any era of Star Wars simply because he’s most recognizable when we don’t see his face.

This fact, combined with the word “book” in the title of the new show, makes it feel very possible that we could be looking at a series that spans Boba Fett’s life, not just his machinations post-Return of the Jedi. One comment from Dave Filoni seems to double-down on that idea, and tease the possibility of huge cameos from classic characters.

In a new story from The Hollywood Reporter, Dave Filoni said the following (emphasis added):

“Boba gives us a direct connection to the Star Wars saga since he was involved in that story...This creates a nice crossover point for both classic characters and new characters. Much of The Mandalorian was new or had not been seen onscreen. Through Boba Fett, we can weave some of those characters and tales together using a character we know but don’t know a lot about.”

Filoni didn’t need to say this. He could have just said, “Boba Fett’s story remains largely untold.” But he specifically mentioned the idea that Boba Fett can crossover with classic characters. Between now and the debut of the show on December 29, this is about as close as we’re going to get to confirmation that a bunch of classic Star Wars cameos are almost certainly coming. In the same interview, Robert Rodriguez said:

“Things turn up you don’t expect, you see things we couldn’t believe we got to do... Every episode has big surprises.”

What does that mean?

Are Lando and Han coming to Book of Boba Fett?

Because The Book of Boba Fett deals so specifically with the criminal element of the Star Wars universe, you have to wonder if two of the most famous smugglers will appear. The notion of a Disney+ Lando Calrissian series starring Donald Glover has been out there for a while now. Could Glover’s Lando appear in Book of Boba Fett? Canonically, the answer is an easy yes. Lando could encounter Boba Fett in the 9 ABY era, but we could also see Lando and Fett in any of the aforementioned hypothetical flashbacks.

Han Solo would be easy enough too. Alden Ehrenreich could still be on the hook for more appearances as Han which, if you squint, could work either as flashbacks or contemporary moments. Glover is 38 and Ehrenreich 32, ages that could fly in both flashback and present day scenes.