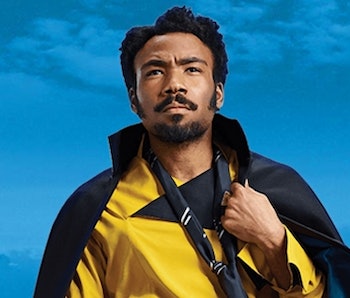 It might not be anyone's favorite Star Wars movie, but Solo: A Star Wars Story demonstrated some deep love of old-school Star Wars books, comics, and video games. It's unrivaled in the Easter egg department and packed full of super-obscure references. From the sly nod to Bounty Hunter Aurra Sing (a character with less than a second of screen time in The Phantom Menace) to a goofy 1997 Star Wars PlayStation game, Solo is a film that hints at several pathways connecting the legit contemporary Star Wars canon to the "Legends" canon of old. But the best example of this low-key retconning is easily Lando's quasi-memoirs, "The Calrissian Chronicles."

If a TV show centered on Donald Glover's Lando Calrissian actually does happen on Disney+, it would be an amazing opportunity to see "The Calrissian Chronicles" come to life, and in doing so, reboot a part of Star Wars that has been untouched for several decades.

Recently, several Star Wars podcasts and fan-run websites have claimed Donald Glover is 100 percent returning to play Lando Calrissian in a new Disney+ series. This has not been confirmed by Lucasfilm or Disney, and yet, there are several precedents to indicate it could actually happen. Right after Solo debuted in 2018, Lucasfilm president Kathleen Kennedy reportedly said, "Lando will be next." Lucasfilm later claimed this comment was lost in translation since it originated with a French magazine Première. Still, two years ago there was hope for a Lando standalone movie — at the same time, Lucasfilm was denying anything about Ewan McGregor returning to the role of Obi-Wan Kenobi, which was later confirmed as totally real.

So let's say the long-rumored Lando standalone movie becomes a Lando TV show. If that happens, the blast doors could be flung open to allow all sorts of non-canon Star Wars stuff to make a comeback. In Solo, when Lando is recording "The Calrissian Chronicles," the scene references the novels by L. Neil Smith, which were later collectively referred to as The Lando Calrissian Adventures. In Solo, the book Lando is referencing is the very first of the Lando novels, Lando Calrissian and the Mindharp of Sharu. The events of this book aren't technically canon, but the novel is notable since it is the first appearance of the game Sabacc, which of course, is part of Star Wars canon. Essentially, Lando's adventures prior to Solo are still kind of up-for-debate, and if the Disney+ show was a prequel to the movie, it could fill in a lot of cool details.

Perhaps the most interesting detail from the early L. Neil Smith books is the idea that Lando actually wasn't a very good pilot and that winning the Millennium Falcon was something of a liability. Basically, winning a starship, and operating a starship with your own funds are two different things. In the opening pages of The Mindharp of Sharu, Lando is seriously annoyed with all the responsibility he's taken on just by even having the ship at all. His confidence in his piloting abilities is so shaky that he's decided to land on an asteroid at the start of the book, mostly, because it's easier. In short, the Lando of these books is cocky outwardly, but secretly a little unsure of himself.

This is interesting character development, but it also helps to explain Lando's partnership with the droid L3-37. In the L. Neil Smith books, Lando had a different droid companion named Vuffi Raa, who, like L3-37, was capable of flying starships. Now, these are clearly different characters, but considering that both Solo and the old books explored the concept of droid sentience, it seems like something a new Lando show could double-down on.

Or, to put it more bluntly, if Phoebe Waller-Bridge can do some voice work in Season 2 of His Dark Materials, then surely she could be coaxed back for a Lando series. In the A.C. Crispin Han Solo books, starting with Rebel Dawn, we learn that Lando got to be a better pilot thanks to the help of Han Solo, but for a while it seemed we'd never see that happen onscreen.

If we got a Disney+ Lando prequel series instead, then the concept of Lando's piloting insecurity could be addressed in a different way: It could lead to his partnership with L3-37 in the first place.

If Disney+ does go forward with "The Calrissian Chronicles," it will not only bring back the pulpy canon of the old Lando novels but allow those stories to perfectly mesh with the new canon we got from Solo. If done right, L3-37 could help Lando get over a problem he had in the old books, almost 40 years ago.

Solo is streaming now on Disney+.