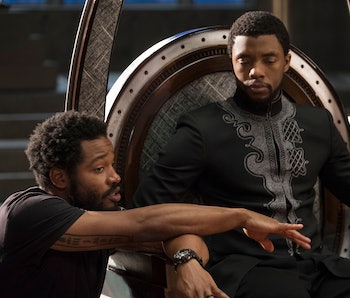 In the summer of 2020, Ryan Coogler was drafting the script that would become Black Panther: Wakanda Forever when Chadwick Boseman died of colon cancer at just 43.

As Boseman was mourned, Coogler had the unenviable task of ensuring the show went on. In August, Coogler wrote in remembrance, “I spent the last year preparing, imagining and writing words for him to say, that we weren’t destined to see.”

Now, as Black Panther: Wakanda Forever’s November 11 release draws near, Coogler tells Inverse what the movie would have been about had Boseman been able to participate. The biggest surprise may be that even before the actor’s death, the movie was always going to be about grief.

“The tonal shift, I will say, was less of a shift than in [casting],” Coogler says.

The predominant tone of grief felt in the final version of Wakanda Forever was present in Coogler’s original drafts. But in earlier versions of the movie, it was Boseman’s T’Challa mourning the loss of time.

Like many in the Marvel Cinematic Universe, T’Challa vanished at the end of 2018’s Avengers: Infinity War when Thanos used the Infinity Stones to wipe out half the universe. The Black Panther returned five in-universe years later at the climax of Avengers: Endgame. In its original form, Coogler saw his sequel as a story where T’Challa struggles to resume life after “The Blip.”

After Boseman died, Coogler worked with co-writer Joe Robert Cole to draft a new story. While the plot and protagonist changed, there are still elements of Wakanda Forever left from Coogler’s original script. Namor the Sub-mariner, played by Tenoch Huerta, “was always the antagonist.”

“There were other characters, for sure, that we considered including,” Coogler says. “Namor was always there.”

In its final form, Black Panther: Wakanda Forever explores grief more explicitly. Mirroring the loss of Boseman, the movie opens with the offscreen passing of T’Challa, which compels all of Wakanda, including the royal family — T’Challa’s mother Queen Ramonda (Angela Bassett) and his scientific sister Shuri (Letitia Wright) — to continue protecting Wakanda from outside plunderers hoping to seize its precious vibranium.

“Namor was always there.”

Black Panther’s longtime comic book rival, Namor the Sub-mariner, swims to the surface of the MCU through the movie’s plot, in which Wakanda endures an existential (and physical) war with Namor’s kingdom, the secret underwater nation of Talokan.