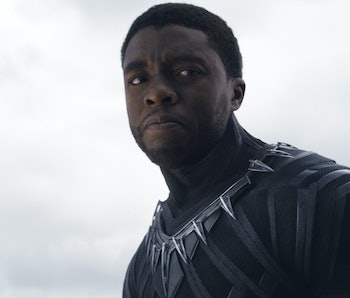 Chadwick Boseman didn't want to make people comfortable. Not even himself. And so, the celebrated actor and star of Black Panther, who died last Friday after a four-year battle with colon cancer at age 43, put his foot down when Marvel Studios balked over his practiced African accent in his portrayal of T'Challa, warrior king of Wakanda.

"They felt that it was maybe too much for an audience to take," Boseman said in a 2018 interview with The Hollywood Reporter. "I was like, 'No, this is such an important factor that if we lose this right now, what else are we gonna throw away for the sake of making people feel comfortable?'"

The accent probably made Boseman himself uncomfortable, too. In a eulogy piece on Marvel.com, Black Panther director Ryan Coogler said Boseman learned Xhosa on the set of 2016's Captain America: Civil War because it was the native tongue of actor John Kani, who played his father, T'Chaka.

Boseman knew what was at stake, and it was more than how one actor did his job. An African superhero speaking with a colonized accent wouldn't just be unfaithful to the comics (in the Marvel Universe, Wakanda was never invaded and none of its people were subject to slavery), it would enable a hurtful implication — Your king was conquered — to resonate in a monumental movie.

What would Black Panther have been if T'Challa, a king people depend upon, did not speak like his people? Boseman knew the answer and fought against it. Though not literally a prince, the Howard University alum's magnetic presence and thoughtful considerations — all on behalf of authenticity to himself, to his people, to his culture — made him worthy of nobility.

It mattered that Boseman was Black Panther, and it mattered Black Panther was Boseman's role to own. Certainly, other Black actors could have made T'Challa as worthy of reverence. Djimon Honsou, who voiced the character in an MTV series and has appeared in other Marvel movies like Guardians of the Galaxy, called it a dream role back in 2012. Chiwetel Ejiofor and David Oyelowo were the internet's other popular choices for a time. Wesley Snipes only did Blade because he couldn't get his own pitch for Black Panther into production.

Boseman had qualities that few can describe but almost everyone can see, and it helped that Coogler's interpretation of T'Challa was as balanced as he was paradoxical. T'Challa was paradox personified: A humble king, a quiet storm, a vulnerable man in a bulletproof costume. The role was an opportunity for any Black actor to shine. Chadwick Boseman cast it in gold.

The role was an opportunity for any Black actor to shine. Chadwick Boseman cast it in gold.

Boseman's death would be heartbreaking even if he never became Black Panther. (Did you know that Boseman auditioned for multiple Marvel movies, including Guardians of the Galaxy?) It also must be said that Boseman famously played real-life Black heroes, like baseball legend Jackie Robinson (in 2013's 42), singer James Brown (in 2014's Get on Up), and lawyer/civil rights activist Justice Thurgood Marshall (2017's Marshall). In a career that spanned less than a decade, Boseman was a chameleon who quite literally embodied Black history.

But the attachment of Boseman as T'Challa/Black Panther was a specific symbiosis of actor and character that catapults icons into legends. Think of Robert Downey Jr. as Iron Man, Christopher Reeve as Superman, or Alan Rickman as Snape. Boseman joins their ranks as an actor seemingly born to play an unforgettable role.

Many of those who've worked with Boseman have already said remembrances better than myself, a faraway observer who only knew Boseman via a screen, ever could. But even in that context, it's clear what gravitational pull Chadwick Boseman wielded. You could see it before Black Panther. You couldn't deny it after. Born in South Carolina, Chadwick Boseman was a man. In his death, he will be remembered as a king.