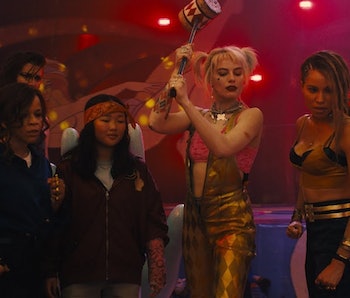 Birds of Prey (and the Fantabulous Emancipation of One Harley Quinn) follows the misadventures of Harley Quinn after an explosive break-up with the Joker as she teams up with Black Canary, Renee Montoya, and Huntress to take down Gotham criminal Roman Sionis and save Cassandra Cain. Birds of Prey earned glowing reviews but bombed at the box office, so is a sequel off the table, or will Harley Quinn rise again?

While the film arguably underwhelmed at the box office, earning just $201.9 million globally, director Cathy Yan already has ideas for what Birds of Prey 2 could entail — including the introduction of Poison Ivy. Not to mention that the film ended with a lot of loose ends that could tie into a sequel. Details are scarce, but we’ve compiled everything we do know about Birds of Prey 2, including cast, plot, and any connections it could draw from DC Universe’s animated Harley Quinn series.

Here's everything we know (or think we know) about Birds of Prey 2, from trailer details to possible plots and casting changes.

No, the studio hasn’t officially confirmed Birds of Prey 2, and many are speculating that it won’t happen at all. However, the good news is that, despite lower than expected box office numbers, Warner Bros. has maintained a working relationship with Birds of Prey writer Christina Hodson, who’s also writing The Flash solo movie and Batgirl.

Speaking with The Wrap, director Cathy Yan said she didn’t think fans were done with Harley or her story either:

Will any Birds of Prey characters appear in other movies?

While Birds of Prey 2 is still up in the air, its characters are set to live on in the DCEU. Margot Robbie and Harley Quinn appeared in The Suicide Squad, which was released in August 2021. Robbie also revealed that she and writer/director James Gunn were working on another Harley project, possibly meaning he could be brought in on any Birds of Prey follow-up.

One bird is guaranteed her own movie out of all of it, though. In August 2021, it was reported that a Black Canary spinoff film was in development. Jurnee Smollett will return to the role, while Misha Green will write. The movie is expected to release on HBO Max.

When will Birds of Prey 2 come out?

There is no official information regarding its premiere.

Who is in the cast of Birds of Prey 2?

Margot Robbie is deeply invested in Harley Quinn and served as producer for Birds of Prey, so it’s pretty much guaranteed she'll be back. Fans should also expect the rest of the cast — Jurnee Smollet-Bell, Mary Elizabeth Winstead, Rosie Perez, and Ella Jay Basco — to return. Ewan McGregor's Roman Sionis was blown up at the end of the film, so it's doubtful he'll show up, though there's no shortage of villains in Gotham City to take his place.

Speaking of which, Cathy Yan expressed interest in including Poison Ivy in the sequel. So there’s a chance the film might explore her relationship with Harley Quinn and the fascinating dynamics between her and the rest of the Birds of Prey.

Is there a trailer for Birds of Prey 2?

No, there’s no trailer yet. Birds of Prey premiered in February 2020, and the first trailer landed a few months earlier, in October 2019. So expect a similar gap between the BoP 2 trailer and the movie's eventual release.

Will Birds of Prey 2 connect to the Harley Quinn animated series?

It’s a long shot as the two are very different beasts, but Birds of Prey and Harley Quinn did share some similarities — a break-up with the Joker, working with a rag-tag crew to take down Gotham villains, being R-rated. Not to mention that the DC Universe cartoon includes Poison Ivy as one of the leading characters, and her friendship with Harley is what grounds the series.

With that in mind, it’s possible the Birds of Prey sequel might draw inspiration from their relationship, which is central to Harley’s growth and development, including her newfound ability to accept the love and help of others in lieu of the abuse she faced while being with the Joker. Whether or not the sequel borrows from Harley Quinn, the film will undoubtedly figure out a way to make the most of its story regardless.

At the very least, Harley Quinn is definitely worth checking out while you wait for a DCEU sequel.

This article was originally published on April 15, 2020