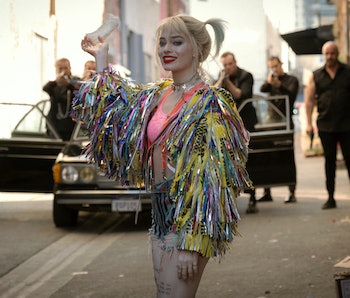 With the DC extended universe changing and evolving with every new movie, it becomes much harder to figure out when and where events take place. Avengers: Endgame showed that the Marvel Cinematic Universe takes place in a linear timeline. But the DCEU? It's a little more complicated, especially with Birds of Prey.

In theaters now, Birds of Prey (and the Emancipation of One Harley Quinn) follows the former clown princess of crime Harley Quinn (Margot Robbie) as she assembles a team to take on Gotham's newest crime lord, Roman Sionis (Ewan McGregor). But just where in the DC timeline does Birds of Prey take place? Is it even the same continuity as movies like Justice League and Batman v Superman?

The short answers are: Yes, it takes place in the DC Extended Universe, or "DCEU" (an unofficial name that fans refuse to stop using). But also, we're not entirely sure where or when in the DCEU Birds of Prey occurs.

What we know about the DCEU timeline and Birds of Prey

All Birds of Prey confirms about itself is that it takes place after 2016's Suicide Squad, itself a movie that takes place after the events of Batman v Superman: Dawn of Justice . Recall that Amanda Waller begins forming "Task Force X" based on the sacrifice of Superman. With the world vulnerable to alien and monstrous threats, Waller hatches a plan to hire the most dangerous criminals alive and make them work for reduced sentences.

It was in Suicide Squad where Margot Robbie made her debut as Harley Quinn, a former psychologist enchanted by the Joker (Jared Leto). But after an arrest by "The Batman," HQ falls under the custody of Waller, where she's recruited into the Suicide Squad. Even after defeating Enchantress, Harley is still imprisoned until her puddin', the Joker, breaks her out. It's all happily ever after. Or not.

As the prologue of Birds of Prey reveals, the Joker didn't change after Suicide Squad. The Joker was still the same asshole, most egregiously taking credit for Harley's flawless plans. That's when the Joker calls it quits on Harley, kicking her to the curb. Initially heartbroken, Harley slowly lands on solid ground (thanks to a new hobby in roller-derby), but it takes the formation of the "Birds of Prey" for her to truly feel like she can stand on her own.

That's the end of what we know: Birds of Prey shares continuity with, and takes place some years after, Suicide Squad. But what about the rest of the DCEU?

It's difficult to tell exactly when Birds of Prey takes place in relation to all DC movies post-Suicide Squad. With a razor-sharp focus only on this side of Gotham City, Birds of Prey never explores the wider DCEU. This is probably not a spoiler, but no visits to Central City, Atlantis, or Themyscira ever takes place in the movie. They never even mention Superman, so it's impossible to know if he's still dead or he's already come back to life, which happens in Justice League.

Which begs some interesting questions: Does Birds of Prey take place after or before movies like Aquaman? What about Shazam? What about the present-day portions of Wonder Woman? Even Justice League doesn't make itself known to the story of Birds of Prey. At the exact same time the Super Friends are fighting Steppenwolf, Harley could also be forming the Birds of Prey. Or maybe not.

The only stray reference to the Justice League, and it's not even a really direct one, is when Harley names her pet hyena after Bruce, "that hunky Wayne guy." And you know what? Harley probably still isn't even aware that "hunky Wayne guy" is actually Batman.

Here's what Birds of Prey's director says about the DCEU timeline

Director Cathy Yan spoke to Inverse and very briefly touched upon the movie's connections to the "DCEU" — or lack thereof. When I asked her during our interview how much the DCEU factored into her movie, Yan said: "Really not at all. Never had to think about it much. I just had to focus on making this movie."

Birds of Prey is in theaters now.

More like this
Entertainment
6.14.2022 4:50 PM
A Joker 2 musical would actually be great — here’s why
By Dais Johnston
Entertainment
6.16.2022 11:30 AM
30 years ago, Tim Burton made the sexiest and most sinister superhero movie
By Mónica Marie Zorrilla
Culture
6.20.2022 12:00 PM
25 years ago, the worst Batman movie ruined the franchise — and inspired a modern trend
By Dais Johnston
Related Tags
Share: