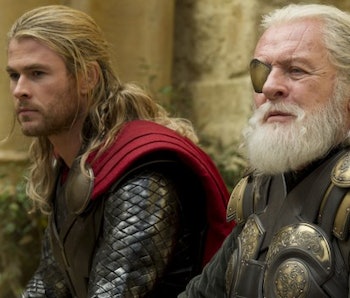 Thor’s journey in Avengers: Endgame took an interesting turn. Unable to halt Thanos’ snap, the God of Thunder went into seclusion and spent the five years post-blip drinking beer, eating pizza, and playing video games. The rest of the Avengers were shocked to learn what had become of the mighty Thor, but a deleted scene from Ragnarok might help to explain Thor’s evolution into Bro Thor in Endgame.

A deleted Thor: Ragnarok scene has surfaced from the Infinity Saga box set, which includes all 23 MCU films and additional footage. The deleted scene shows Thor and Loki searching for Odin, whose memories have been erased courtesy of the trickster god. They find him in a New York alley, wading through garbage in search of booze. Odin is unkempt, disoriented, and clearly drunk, though he quickly sobers up as soon as his daughter Hela shows up.

Odin looks remarkrably similar to Thor in Endgame. Bro Thor let his hair grow out and had an affinity for beer, just like Odin does. They're even wearing similar red jackets and gloves. In short, Thor really did become his father. The visual parallels don’t lie, either. Check out the side-by-side comparison below, courtesy of Reddit user cyberr_c28z.

The deleted scene is interesting for a few other reasons as well. While it’s unclear why the scene was cut, Odin’s fate and Hela’s appearance play out much differently in the theatrical version of Ragnarok. Here, Hela and Odin face off before she kills dear old dad, forcing Thor and Loki to escape before she can attack them. However, Thor and Loki actually find Odin in Norway in the actual film, peacefully thinking back on his life and enjoying the view. After exchanging some heartfelt words, Odin dies, but not by Hela’s hand.

It would seem that Ragnarok’s deleted scene suffered the same fate as a cut scene from Captain America: Civil War, which saw Baron Zemo’s actions altered in the theatrical release. It’s unclear why Odin’s death was changed, but it’s possible that Taika Waititi and Marvel thought it best to let the man die in peace than be killed by his daughter on the street. While neither versions of his death changed the outcome of Ragnarok or Bro Thor’s existence, it’s fun to have confirmation that the God of Thunder really did take after his father in more ways than one.

Thor: Ragnarok is now available to stream on Disney+.