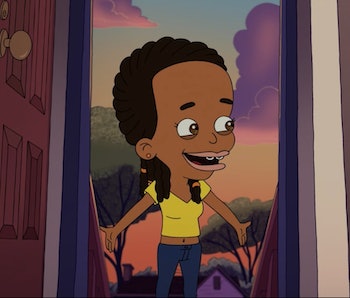 This article about Season 4 of the series Big Mouth was originally published on October 29, 2019 and updated on January 2, 2022 following the release of the season on Netflix. Read on for the original article, with some new changes to reflect the latest updates on this topic.

Big Mouth Season 4 is here. After a long break (and an unexpected Valentine's Day special), Netflix's raunchiest cartoon returned in December 2020, reuniting us with our favorite animated tweens and their hilarious puberty monsters — along with some exciting new characters and a new voice actor for Missy.

Now that Season 4 has arrived, we can still look forward to at least two more seasons of Big Mouth, a planned spin-off called Human Resources, and even more shows. But while we wait for all that, let's reflect on Big Mouth Season 4.

Here's our initial review of Big Mouth Season 4, which focuses on how the show has surpassed the series that arguably inspired it, South Park. We've also got this think piece about how Season 4 fixes the biggest problem with Season 3.

When was the Big Mouth Season 4 release date?

Big Mouth Season 4 premiered on Netflix on December 4, 2020, roughly two months after we originally expected it to due to pandemic-inflected delays.

What was the Big Mouth Season 4 release time?

Like every Netflix show, Big Mouth Season 4 was released at 3 a.m. Eastern, (aka, midnight Pacific time).

Is there a Big Mouth Season 4 trailer?

In the trailer, everyone is at summer camp, where all of the children have gathered after Season 3 ended at the school year's conclusion. But somewhat quickly, we're back in school (the summer camp plot only lasts a few episodes at the start of Season 4).

Everything's a bit chaotic, but the most notable addition is a new kind of monster called Tito the Anxiety Mosquito (Maria Bamford). Previous seasons complemented the Hormone Monsters with the Shame Wizard, Depression Kitty, and the Menopause Banshee. Big Mouth Season 4 adds anxiety to the mix.

Who are the Big Mouth Season 4 guest star characters?

Netflix announced a list of guest stars with the release of the Season 4 trailer on November 13. In addition to Maria Bamford joining the show as Tito, there's also Zach Galifianakis' Gratitoad, "who is there to help our crew cope with their anxiety and not let it completely own them."

Seth Rogen voices a chubby child at camp named Seth Goldberg, who seems a bit older than the core cast. John Oliver plays a camp counselor named Harry, who wears socks with his sandals, which is already the most monstrous thing about Season 4. Sterling K. Brown is Jessi's new boyfriend, Michael Angelo; Giamatti voices Andrew's poop, while Maya Erskine and Anna Konkle play the Cafeteria Girls in what feels like a Big Mouth-PEN15 crossover episode.

Are there any other Big Mouth Season 4 character changes?

Actress Jenny Slate left the show in July 2020, reasoning that "Black characters on an animated show should be played by Black people." Slate, who is Jewish and white, voiced Missy, a young girl who is half-Jewish, half-Black.

Her decision came roughly a month after the killing of George Floyd at a time when the entertainment industry began to reckon more directly with a lack of diversity in terms of representation across TV and film. A lengthy statement on Slate's Instagram account goes into further detail.

That same day, show co-creator Nick Kroll released a statement via Twitter on behalf of the other creators supporting Slate's decision.

"We sincerely apologize for and regret our initial decision to cast a white actor to voice a biracial character," it reads, conveying the intention to recast the character with a Black actor to better represent her identity.

Netflix then announced on August 28, 2020, that comedy writer and performer Ayo Edebiri would assume the role of Missy in the penultimate episode of Season 4.

"I was definitely a very uncomfortable child, so I think the show speaks to that and a lot of those feelings, which still resonate with me as an adult," Edebiri told Variety. "I'm back home in my childhood bedroom right now and on my bookshelf in between 'A Series of Unfortunate Events' is Bill Clinton's autobiography and Nelson Mandela's autobiography and a translation of 'The Iliad' in Latin. I was a true dork. So I don't think I have to go too far to connect with Missy."

Edebiri actually joined the Big Mouth team as a writer on Season 5 before being tapped for this new role. There's a "moment" in the second-to-last episode of Season 4 that felt like a natural fit for some transition to happen for Missy.

"It's about Missy's continued evolution as a person — that she has all of these different parts of who she is," Kroll toldVariety. "There's the sidelines Missy and the more sexually adventurous Missy, mirror Missy, and then also this Missy that she's been discovering [in Season 4] through hanging out with her cousins and really taking a look at her Black identity."

Big Mouth dives into meta-commentary with this character as Missy spends time with Black family members, which causes an identity shift that manifests as the change in voice. It's a provocative approach to really say something about the phenomenon, and we'd expect nothing less from a show this smart.

How did the end of Big Mouth Season 3 set up Season 4?

After Nick kissed Missy in a later episode and even went on a date with her, Andrew discovered and took the betrayal really hard. It drove a wedge so big between the former best friends that Andrew essentially broke up with Nick in the finale and didn't go to summer camp. But in the trailer, Andrew still shows up at summer camp anyway. The two seem to gain new best friends.

Similarly, Missy finds herself ostracized by both boys when Nick realizes he doesn't want to date her. Kissing Nick also triggered a breakup between her and Lars, so everyone winds up alone.

Another dramatic change for the series is that Jessi's mother decided that they were moving to New York City, leaving Missy with one less female friend. Matthew also expresses disappointment at her leaving, but during the superhero episode, Jessi's truth powers reveal that he isn't all that worried because he has his new boyfriend, Aidan. However, Jessi still shows up at summer camp, so for all the ways that the Season 3 finale shook up the status quo, it was restored in Season 4.

During the New York Comic Con 2019 panel ahead of Big Mouth Season 3's release, Nick Kroll teased that the show might return to the world of the hormone monsters in future seasons, and later on, he confirmed that a spin-off called Human Resources was in development.

"It's about the monsters and the creatures who manage people," Kroll said to the enthusiastic crowd at NYCC. "We're excited to tell a lot of different stories, not just about puberty, but about all stages of life." He also confirmed that they'd start production on the new series only after finishing Big Mouth Season 5.

Was Big Mouth renewed for Season 5?

And then some! All the way back in July 2019, during Big Mouth Season 3, Netflix renewed the series for three more seasons. Season 5 premiered in November 2021, and Season 6 is currently in development.