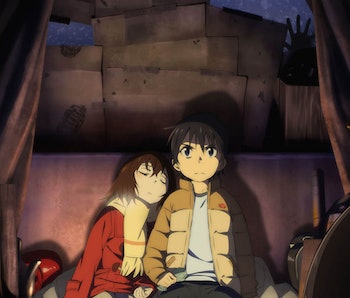 Time travel shows are always fun. They may be long-standing franchises like Doctor Who, or cult classics like Dark, but many recent offerings in the subgenre have a gritty tone to offset the absurdity of the central premise. Luckily, one series on Netflix takes a completely different approach that pays off in spades. Here's why you should give it a watch.

Erased is a 2016 anime based on the manga of the same name. It has what seems to be a very classic premise — Satoru Fujinuma is a 29-year-old manga creator and delivery boy with a secret power. At random times, he involuntarily travels back in time (usually less than five minutes) in order to save people's lives. This is established from the get-go, with Satoru saving a schoolchild from being run over by a truck driver asleep at the wheel, landing him in the hospital for two days.

While he recovers at home with his mother, he's reminded of a childhood friend who was murdered when he was in the fifth grade. While an arrest was made, Satoru always believed they got the wrong guy. After a devastating loss, Satoru experiences another one of his time jumps — but instead of going back five minutes, he goes back 18 years.

What follows is a weird, Looper-style series of preventing crime before it can happen. In between the nostalgic moments of 11-year-olds gushing about Dragon Quest and Final Fantasy, Satoru attempts to bond with shy schoolgirl Kayo Hinozuki to keep her from suffering that terrible fate. It seems innocent, but the series deals with murder, child abuse, and other tough topics.

If you're an experienced anime fan, this is just another example of the medium lending itself well to whatever genre it molds itself to. If you're an anime beginner, this series is a perfect place to start. The plot wouldn't be out of place on an hour-long NBC crime show airing Wednesday nights in 2006. What's more, the English dub is full of excellent performances and sound design.

If you're still daunted by the anime style, don't fret. There are two different versions of Erased on Netflix, one animated, one live-action. The two differ wildly, so the best way to experience the story is to watch both and compare and contrast. While the two depictions are different both in plot and medium, it's fascinating to see how it changes the way we see a complex story like Satoru's.

Erased is now streaming on Netflix.

More like this
Culture
8.2.2022 9:00 AM
7 incredible sci-fi shows and movies coming to Netflix in August 2022
By Robin Bea
Culture
7.26.2022 11:30 AM
You need to watch Christopher Nolan’s most important sci-fi movie before it leaves Netflix next week
By Alex Welch
Entertainment
11 hours ago
Chainsaw Man anime release window, cast, trailer, studio, and plot for the ultra-violent show
By Mónica Marie Zorrilla
Related Tags
Share: