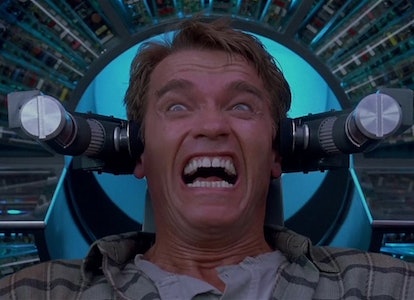 Science fiction is a very tropey genre. There are hundreds of sci-fi movies that follow the same plot and hit the same beats with only a few changes of character or setting. Finding a movie that is truly unpredictable is rare, but this movie streaming on Netflix is that and more. There’s a reason why it’s considered one of the best science fiction movies ever made — it delivers heart-stopping action combined with fabulous special effects and constant twists and turns.

Total Recall is a 1990 futuristic sci-fi action thriller directed by the great Paul Verhoeven (of RoboCop and Starship Troopers fame.) It stars Arnold Schwarzenegger as Douglas Quaid, a lowly construction worker who dreams of Mars. So he visits Rekall, a company that implants memories of vacations at a fraction of the cost of actually traveling there.

But when the procedure goes terribly wrong, Douglas has to face the ugly truth about not only his past but a mission laid for his future, a mission that will take him to the very place he’s dreamt of for years — Mars.

There are so many elements of Total Recall that intersect to become the powerhouse film that it is, but none of them would mean anything without the twisting plot. Roughly based on the Philip K. Dick short story “We Can Remember It for You Wholesale,” Total Recall uses the concept of unreliable narrators to the nth degree.

Just like Douglas, we’re introduced to his idyllic life and accept it to be normal, only to have the rug pulled from both us, and him. He’s the ultimate point of view character. His life truly begins when he decides to visit Rekall, so that’s when we’re first introduced to him. But his life is revealed to be a lie multiple times over, and each time it’s equally shocking and believable.

The special effects by Rob Bottin balance computer and practical effects so well, and use face prosthetics in a way you won’t believe is even possible. Yes, there’s a woman with three breasts in a Martian brothel, but there are also multiple literal eye-popping transformations of people in Mars’ thin environment. It’s no wonder Bottin received a Special Achievement Academy Award for this movie, even though he worked on other films like The Fog, The Thing, and RoboCop.

Then, there’s Arnold Schwarzenegger. No actor can compare with his unique ability to give 110% to every line of dialogue and bit of fight choreography while still looking like he wandered off Muscle Beach onto a film set. That’s probably why the 2012 remake of Total Recall starring Colin Farrell pales in comparison.

All of these elements combine into what could be argued is the most important science fiction movie of all time, the kind of lightning in a bottle that makes for the ultimate 113 minutes of sci-fi cinema. If you haven’t seen this piece of history, now’s your chance.

Total Recall is now streaming on Netflix in the U.S.