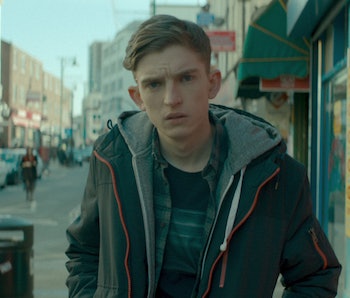 In the competitive Netflix catalog, sometimes a title is all you can go by. An intriguing, attention-grabbing name can be the difference between weeks in Netflix's top 10 and being lost in the ever-changing shuffle. This 2018 movie has a terrible title, but more than makes up for it with a gritty story that turns technological cautionary tales on their head.

IBoy is a 2018 Netflix British sci-fi movie starring Bill Milner and Maisie Williams, based on a 2010 novel by Kevin Brooks. It somehow has the premise of a Black Mirror episode or a Disney Channel Original Movie — Tom Harvey is just an everyday student until an encounter with a gang of bullies leaves him with shards of a smartphone embedded in his brain allowing him the power to hack and control all sorts of electric devices.

Tom decides to use his new powers to humiliate the attackers, who assaulted his best friend, Lucy. Lucy starts receiving text messages (sent with Tom's mind) from someone calling himself iBoy as he gets embroiled in gang violence, the drug market, and betrayal.

While the premise does sound like a superhero movie, this film is a lot more Dark Knight than Batman Forever. Tom walks the streets of London at night, trying to track down Lucy's attackers and resorting to some objectively terrible acts in his fight for vigilante justice. Private moments are displayed before the entire school, houses have all their electronics blown out one by one, a car locks with them inside and starts catching fire. In one frankly terrifying scene, Tom single-handedly creates a citywide blackout with only his mind.

Beyond the dark plot, the production itself is visually grey and muddy but incredibly engaging. Portraying digital devices with user interfaces is not the most cinematic choice, so iBoy uses special effects to show the hacking as Tom sees it, as a cloud of information and text surrounding his head, inserting itself into every single bit of his life.

The superb acting transforms this sci-fi concept into a surprisingly satisfying gang revenge story. Miranda Richardson, known for playing Rita Skeeter in the Harry Potter movies, plays Tom's grandmother, who writes romance novels and provides a very Aunt May-esque guardian for another teen vigilante. Rory Kinnear makes an appearance as a skeevy mob boss, and Maisie Williams is of course great, even if her role is 90 percent just feeling sad.

The most interesting thing about iBoy is that it doesn't use Tom's powers to make social commentary about how our society spends too much time on phones. Unlike Black Mirror, which falls into "fable" territory all too easily, iBoy uses technology as a tool, not a moral. It tells a rough-around-the-edges revenge story that will have you on the edge of your seat for every second of its concrete jungle action.

iBoy is now streaming on Netflix.

More like this
Science
November 26, 2022
The scariest sci-fi movie on Netflix mirrors a real-life threat
By Tara Yarlagadda
Culture
November 24, 2022
One of A24’s least-seen movies is also one of its most intriguing
By Dais Johnston
Culture
November 17, 2022
Before E.T., Steve Spielberg made this underrated sci-fi masterpiece
By Mark Hill
Related Tags
Share: