“From a fault comes a change.” 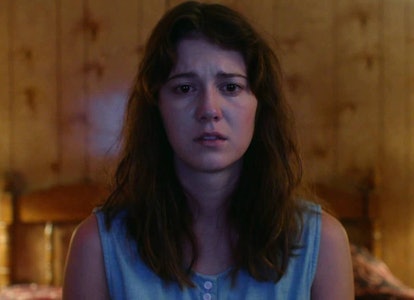 Cults, whatever they profess to believe, don’t have access to the secrets of the universe, and disciples can’t develop superpowers simply by following the teachings of their leaders. But the fervent convictions of cult members can sometimes make even the most impossible beliefs sound plausible.

Author and cult deprogramming expert Ansel Roth (Leland Orser) knows this, although his expertise isn’t enough to protect him.

In this 2014 cult thriller, which marked the feature debut of writer-director Riley Stearns (The Art of Self-Defense), Ansel comes into contact with cult member Claire (Mary Elizabeth Winstead, of Scott Pilgrim vs. the World and Birds of Prey), setting them both down a dangerous path within the confines of one mundane hotel room.

Faults, now streaming for free online, introduces Ansel at his lowest point, haggling with the manager of a budget-hotel restaurant over a $4.75 bill. Ansel has been booked to lead a seminar in the hotel conference center, for which he’s been comped a room and a meal at the restaurant. But, as the manager points out, he’s attempting to reuse his single meal voucher, which he retrieved from the trash the night before. As employees force him to leave, Ansel attempts to eat as much ketchup as he can, spiting people only trying to do their jobs.

Ansel is more than just a pathetic figure in Faults, though the movie gets substantial comedic mileage out of his abject failures along the way to a life-changing encounter with Claire. Balancing dark humor with genuine pathos, Stearns lingers on scenes of Ansel giving his lecture to a handful of people in a sad-looking meeting room (including a little boy in a towel who’s clearly wandered in from the hotel pool). An angry man interrupts Ansel to accuse him of driving his sister to suicide after a deprogramming session, then punching Ansel in the face.

Following this altercation, Ansel is approached by an older couple, Paul (Chris Ellis) and Evelyn (Beth Grant), who want him to help rescue their daughter from a cult known as Faults. Initially, Ansel isn’t even interested in hearing them out. But after a night of sleeping in his car, and following a visit from a menacing enforcer (Lance Reddick) who demands that Ansel repay a debt owed to his manager, the couple’s offer seems a lot more enticing.

Ansel’s deprogramming process depends on him retaining control over situations at all times, but he ironically controls very little in his own life. From the start, Ansel’s operation to kidnap and deprogram Paul and Evelyn’s daughter, Claire (Winstead), is a comedy of errors. His hired henchmen can barely get Claire into the van. They book a hotel room on the wrong floor, with only one bed. As Ansel prepares for his first session with Claire, his nose starts bleeding spontaneously. Later, his coat catches on fire.

Orser plays Ansel with such abject desperation that even his mustache looks needy. He’s a model for the kind of thwarted masculinity that Stearns went on to explore in 2019’s The Art of Self-Defense, starring Jesse Eisenberg and Imogen Poots as students at a mysterious karate dōjō.

In contrast, Claire remains serenely poised from the moment she’s grabbed outside of a supermarket. Winstead gives a fascinatingly creepy performance as a woman unwaveringly confident in the powers that she and her fellow cult members possess. Ansel orders her to be kept awake for the entire first night she’s in the hotel; but instead of breaking down, she sits completely still until morning. Stearns even frames Claire with a slight glow around her head, even if that’s just coming from the electric light on the wall behind her.

“I’m thinking about how I want to rip your tongue out of your throat so you’ll shut up,” she tells Ansel when he asks what’s on her mind, and it’s easy to believe that she has the ability and the willingness to do just that. Everything she says and does is carefully modulated to produce a desired reaction from Ansel. And as the movie goes on, it’s the supposed cult expert who breaks down: under pressure to pay back the money he owes, under crushing regrets that still follow him after a failed TV show and broken marriage, and certainly under the skillful manipulations of Claire herself.

Something is obviously off about Claire and her parents from the start, but Ansel is so fixated on getting paid that he either ignores this eeriness or can’t see it. Ellis and Grant give subtly off-kilter performances that only grow stranger as Faults progresses, establishing an unsettling aura often just by existing in the background. (In one brilliant scene, Evelyn stares dead-eyed into the distance while other characters talk). Claire talks about her fellow cult members mastering invisibility and about her own ability to leave her body and travel through walls.

Maybe it’s all a trick meant to lure in Ansel and get him to betray his own deeply held beliefs. Or maybe Claire and the other members of Faults really have tapped into powers beyond the realm of human comprehension. “From a fault comes a change,” Claire tells Ansel, and she’s right about that, at least as it pertains to Ansel himself. Whether Claire’s power comes from unseen forces of the universe or just from her own diabolical mind, its impact on Ansel is very real.

“I’m in control,” she tells him as the man’s will crumbles. By that point, there’s no doubt as to who’s really pulling whose strings.

Faults is streaming for free on Crackle, Plex, Pluto TV, Popcornflix, Tubi, Vudu, and Hoopla in the U.S.

More like this
Culture
Jan. 31, 2023
Final Destination 2 Perfected the Art of the Gross-Out Kill
By Jon O'Brien
Entertainment
Feb. 7, 2023
My Animal is an Intoxicating Werewolf Romance With a Queer Bite
By Isaac Feldberg
Entertainment
Jan. 30, 2023
In Infinity Pool, Brandon Cronenberg Puts Alexander Skarsgärd Through Hell
By Isaac Feldberg
LEARN SOMETHING NEW EVERY DAY.
Related Tags
Share: