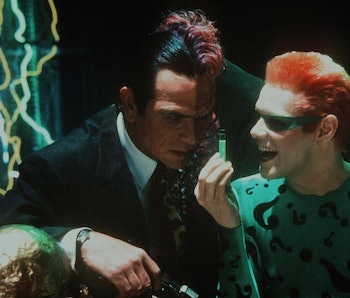 The release of the “Snyder Cut” made everyone forget the term “director’s cut.” And while director’s cuts are very neat and very cool, not every cut is worth a fan campaign and a billboard in Times Square.

At least, that’s where I sit as a new director’s cut builds momentum. Batman Forever, a controversial DC Comics movie is confirmed to have a longer, darker version that represented director Joel Schumacher’s original intentions for the Caped Crusader.

I have a lot of personal affection for Batman Forever — it’s the first movie I ever saw in theaters — but I feel fatigued over calls to #ReleaseTheSchumacherCut.

On April 10, film producer, screenwriter, and director Akiva Goldsman took part in a virtual Q&A with the Austin Film Festival. The textbook definition of a Hollywood figure, Goldsman’s credits include hits like A Beautiful Mind (2001), I, Robot (2004), and The Da Vinci Code (2006).

Goldsman was also a protégé of the late Joel Schumacher, having worked together on both 1995’s Batman Forever and 1997’s Batman & Robin. While the two films were long unfavored by Batman fans for their campy tone, Schumacher’s death has inspired a reassessment of the movies, especially in contrast to the firmly cemented gritty tone surrounding Batman ever since Christopher Nolan’s Dark Knight trilogy.

During the Q&A, Goldsman talks up Schumacher’s original version of Batman Forever — formally called “Preview Cut One” by those who worked on it — that existed prior to edits and revisions meant to lighten up the movie. He says:

“Batman Forever sort of still has a renaissance coming. I really am interested to see whether the original cut of Batman Forever comes out. Because I got to see it recently, the very first one, which was referred to as ‘Preview Cut One.’ And it was really dark. It was a pretty psychological exploration of guilt and shame. I find that there’s a lot of psychological underpinnings in the things that I find myself wanting to live in and around.”

While the Q&A took place back in April, it’s only received notice now after making its way to Twitter, where calls to #ReleaseTheSchumacherCut will likely only get louder and stronger.

In principle, I’m in favor of director’s cuts, especially for mainstream blockbuster movies that come with a thousand and one studio notes that, more often than not, hamper a creator’s vision. I defended this position not long ago when the Snyder Cut was finally released on HBO Max. Director’s cuts are good!

But the way the Snyder Cut went from a hashtag to a streaming feature has clouded the way audiences talk about director’s cuts in the first place. It presumes the creative process is a zero-sum game and that storytellers only ever have one true perspective that never changes. It implies creativity is like ice when it really flows like a river. (These fan-led movements often devolve into online harassment campaigns, which could easily happen with a #releasetheschumachercut hashtag, but that’s a whole other discussion.)

While most directors obviously speak favorably about director’s cuts, other filmmakers argue that the theatrical versions are by definition their version of the movie. Marvel nemesis Martin Scorsese said as much in 2019, during the release of his film The Irishman.

“The director’s cut is the film that’s released — unless it’s been taken away from the director by the financiers and the studio,” Scorsese told Entertainment Weekly. “[The director] has made their decisions based on the process they were going through at the time ... Sometimes [a director says], ‘I wish I could go back and put it all back together.’ But I do think once the die is cast, you have to go with it and say, ‘That’s the movie I made under those circumstances.'”

In his own way, Schumacher agreed. In a 2015 interview with Forbes, Schumacher recalled working with the now-disgraced Woody Allen on Annie Hall on the wardrobe and set departments. He observed that Allen went into the movie with one idea, but emerged from the process with a different idea:

“Originally the movie was called Anhedonia ... and it was about Woody with different women in a person's lifetime. [Editor] Ralph [Rosenblum], when he put together the rough cut, said, ‘This movie is about you and Diane.’ And then Woody reshot a lot and the rest is history.”

Schumacher said elsewhere in that same interview: “We’re never really making what we think we’re making. I can’t speak for other directors, but as far as I’m concerned, but if you keep your eyes open and your ears open then the movie will teach you what you're making.”

Schumacher died in June 2020, so he isn’t alive to provide his “true vision” to Batman Forever. Posthumous “director’s cuts” are possible — the 1998 “restoration” of Orson Welles’ 1958 noir Touch of Evil came to be 13 years after Welles died — and for Schumacher, it would be a poetic commemoration for his enigmatic vision for Batman to be shared after comic book fans spent years grinding axes. I just don’t want to see it as a hashtag.