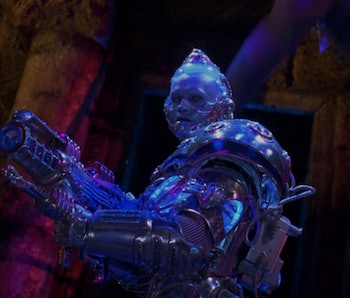 To this day, Batman fans aren’t kind toward the 1997 film Batman & Robin. It’s gotten to the point Joel Schumacher publicly apologized for directing it, even though it’s just a harmless superhero movie.

Schumacher has revealed more insight into his time on Batman, saying that he “shouldn’t have made a sequel.”

On Wednesday, Vulture published an interview with the 79-year-old Schumacher, who opens up about his long, storied directing career, now that he’s essentially retired. His last movie was 2011’s Trespass, though he did two episodes of the Netflix series House of Cards in 2013.

Schumacher’s DC films, 1995’s Batman Forever, and 1997’s Batman & Robin, get their fair share of page space. The latter was unanimously panned by critics and comic book fans so severely, a third movie was canceled. No Batman movies were made until the reboot that was 2005’s Batman Begins.

Schumacher doesn’t explore Bat-canon in the way directors of superhero movies are expected. Instead, he openly talks about navigating actor egos on the set of Batman Forever, which saw Val Kilmer suit up against foes Two-Face (Tommy Lee Jones), and the Riddler (Jim Carrey).

Schumacher famously said Jones was “overpaid, overprivileged” in People in the weeks leading up to shooting Batman & Robin.

“[Jones] was not kind to Jim Carrey when we were making Batman Forever,” Schumacher told Vulture. “And I didn’t say Val [Kilmer] was difficult to work with on Batman Forever. I said he was psychotic.”

Schumacher added, “Tommy is, and I say this with great respect, a scene stealer. Well, you can’t steal the scene from Jim Carrey. It’s impossible. And, I think it irked Tommy … He did not act towards Jim the way an Oscar winner with a star on Hollywood Boulevard, being the oldest member of the cast, and having such a distinguished career and the accolades to go with it, should have acted towards Jim. But what happens on the set stays on the set.”

But that was Batman Forever. Its middling reviews and modest box office returns didn’t deter the Batman franchise. The one to completely derail it was Batman & Robin, which saw George Clooney replace Kilmer and added Arnold Schwarzeneggar and Uma Thurman as villains. It was this movie that Schumacher has previously apologized.

When Vulture asked Schumacher, a gay man, about the criticisms for the noted queer subtext of his Batman movies, the director replied:

“You know what I think? I shouldn’t have made a sequel, and that’s all there is to it. I learned that sequels are only made for one reason. I’m sure that Batman Forever was the cheapest Batman movie ever made because Val didn’t get a lot of money, Nicole [Kidman] didn’t, Chris O’Donnell didn’t, and I didn’t. Tommy got a bit of a payday because he’d just won the Oscar for The Fugitive and Jim Carrey had already done Ace Ventura.”

Schumacher also acknowledged that while his films were not liked by critics, he still relished the box office returns. “It is the greatest thing that can happen to you,” Schumacher said. “Because it reminds you who you made the movie for. And if you want to make movies just for the critics, they will fuck you anyway.”

There’s no shortage of insight into the making of the ‘90s Batman movies, including entire books on how the films, for better or worse, shaped today’s geek pop culture. Fast forward to now, and there’s a Scorsese-influenced movie about the Joker that will hit theaters in October, while Batman has undergone even more revisions since Schumacher’s era.

Schumacher says it best himself in his interview: “Batman has survived since 1939 — we’re the same age. Nothing has ever stopped Batman.”