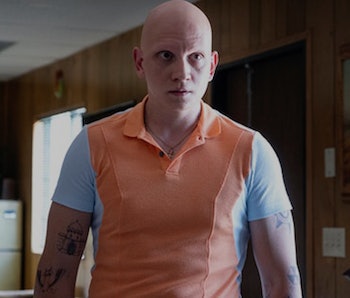 There’s something strange happening in Barry Season 3. You might not notice at first, but the HBO series (finally back after a three-year break) constantly introduces new characters only to reveal that they’re just set-dressing for the actual story.

In one scene, we watch an unnamed lesbian couple eat dinner while one woman demands to know why she’s being dumped, only for Henry Winkler to suddenly run through their backyard unnoticed while chased by a dozen dogs (“It’s because you have too many dogs!” her partner finally shouts). In another scene, a nondescript woman walks down the street while describing the worst first date ever (“He ordered milk!”) before the camera pans out to show an army of Bolivian mercenaries encircling a Los Angeles office building.

What begins as a funny gag snowballs into a motif. Upon further reflection, the message seems obvious: It’s not just the main characters of Barry who are off — it’s everyone in this entire world. From the beignet-maker drawing lines around the block not just for his pastries but for his stoner-bro wisdom to the executives at BanShee (a meta stand-in for HBO Max), everyone in this world is weird, sad, and funny in their own unearthly way. As the lens pulls back, one thing becomes clear: Bill Hader and Alec Berg have created something brilliant, unlike anything we’ve seen before.

Barry is a slow-burn kind of TV show. It wasn’t until a very special episode midway through Season 2 that I finally realized I liked this dark comedy about a psychologically damaged hitman (Bill Hader as Barry) who finds something better in an LA acting class led by a burn-out thespian played by the Fonz.

But Barry is also the kind of show that sinks its hooks into you. Supporting characters like Fuches (Barry’s handler played by eternal that-guy actor Stephen Root), breakout star NoHo Hank (Anthony Carrigan as an incompetent Chechen crime boss), and Sally (Sarah Goldberg as the ultimate struggling Millennial) stick around long enough to make you fall in love, while Barry and Winkler’s Gene Cousineau reveal themselves to be hollowed out husks practically devoid of humanity.

This might not sound like appealing television, and on the surface, it isn’t. But after two seasons, Barry had earned its spot as one of HBO’s best shows. That was in 2019 before… everything and before HBO Max. The series returns for Season 3 in a very different landscape, but Barry has never been more timely or entertaining.

Barry Season 3 picks up shortly after Season 2. Gene finally knows that Barry murdered his girlfriend Janice (a cop investigating the assassin-turned actor). Gene confronts Barry, and when things go sideways Barry becomes determined to earn his former teacher’s forgiveness by getting him an acting job.

This won’t be easy. Everyone in Hollywood hates Gene (rightfully so considering this is a guy who once brought a firearm to a Full House audition and throws coffee at assistants). But when Barry miraculously succeeds, it sparks a chain of charitable action and forgiveness that extends outward into the show’s off-kilter version of Los Angeles.

Elsewhere, NoHo Hank gets an arc of its own that’s incredibly entertaining (and sometimes powerfully moving). It only suffers from feeling like the eternal B-plot to Barry’s own antics. This is a disservice both to Anthony Carrigan’s incredible performance and the larger cast of bungling gangsters who’d rather spend the night on a Hollywood tour bus than actually committing crimes.

Conversely, Sally gets more screen time in Season 3 as the star and showrunner of her own streaming series about a divorced mom and her teenage child. Sally’s arc elevates her character from a one-dimensional parody of white Millenial women to something deeper as the story of abuse she’s trying to tell forces her to confront the problems in her life. The details of launching a streaming series — namely dealing with press junkets and feeling beholden to computer algorithms — straddles the line between meta-comedy and navel-gazing. (I’m not sure I’d enjoy some scenes as much if I wasn’t already an entertainment journalist.)

If you’re wondering whether Barry Season 3 has an episode on the level of Season 2’s “ronny/lily” (the one where Barry battles a small girl with godly martial arts abilities), the answer is a disappointing no. At least, the six episodes I was given (out of eight total) never reach those heights, though Season 3 Episode 6 comes close thanks to a tense motorcycle chase through LA gridlock. (It’s possible Episodes 7 and 8 will surprise me.)

But maybe Barry doesn’t need another “ronny/lily.” The series already won us over in Season 2. Now, in Season 3, it can reveal its true intentions: to explore every corner of its incredibly weird, beautiful, upsetting, and terrifying world.