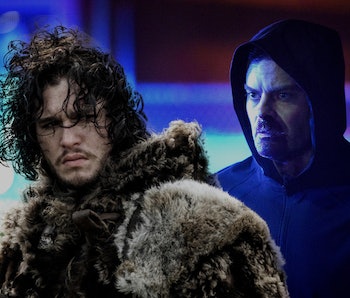 HBO released one of the most thrilling episodes of television in recent memory on Sunday, April 28. No, I’m not talking about Game of Thrones and it’s 82-minute battle scene. I’m talking about Barry, Bill Hader’s overlooked sitcom, which delivered better action, a more compelling story, and funnier jokes in a lean 30 minutes. (And this is coming from someone who’s obsessed with Game of Thrones.)

Light spoilers for Game of Thrones and Barry ahead.

If you’ve never watched Barry you’re missing out. What began as a fish-out-of-water tale about an assassin (Hader as Barry) trying to escape his current line of work and make it in Los Angeles as an actor transformed into something truly special by the end of its first season.

Season 2 has continued the upward trajectory of Barry, while leaning on an incredible supporting cast that includes Henry Winkler as a pompous acting teacher and the unexpectedly awesome Anthony Carrigan as Chechnyan gangster NoHo Hank. Stephen Root (the stapler guy from Office Space) also plays Barry’s sadistic handler Fuches. Sarah Goldberg as aspiring actress Sally Reed is painfully real, smart, funny, and somehow narcissistic enough not to figure out what Barry is up to even while they’re dating; in a show full of oddballs, she might be the most realistic portrayal of an actual human.

In the fifth episode of its second season, titled simply “ronny/lily,” Barry achieved new heights. The episode begins with Barry already on a mission. A crooked police officer has him pinned for murder, and he’s using that information to extort Barry into killing his ex-wife’s boyfriend. In response, Hader’s character attempts to strike a deal with his new target, Ronny, offering to help him hide out in Chicago for a year so nobody has to die.

This doesn’t work. It turns out Ronny is a taekwondo champion, and he quickly unleashes a series of jaw-dropping spinning kicks. Before long, the two of them are grappling on the floor. Later, Ronny wields nunchucks. In the end, Ronny’s windpipe is broken and Barry’s face is caked in his own blood, leaving the appearance of a heavy five o’clock shadow, but red.

It’s a brutal scene, the kind of intense close-up combat the Battle of Winterfell just can’t replicate. Behind the fog of war, we know each GoT character is going through their own personal struggle for life, but we rarely see them under the darkness of night. In the California sun of Barry, everything else is stripped away and all that’s left is the pure human instinct to survive. Unlike Jon Snow, who excels and killing and seems to relish combat, Barry has stopped enjoying his career as a hitman; he’s just really good at it.

That initial showdown is just the beginning. As the title suggests, with Ronny taken care of, Barry still has to deal with Lily, who turns out to be the young daughter Ronny’s been training. This is where Barry drifts from pure violence into surrealism. Lily howls like a wild animal and soars across the room like a character in Crouching Tiger, Hidden Dragon. “What are you?!” screams Fuches, Stephen Root’s character, as she torments them.

“I don’t know if she’s human or not,” Hader told the Washington Post when asked about Lily’s super powers.

Watching this small girl (a talented mixed martial arts master hired specifically for these skills) make short work of a man three times her size is equal parts mesmerizing and mind-blowing. When Lily leaps across the room to stab Barry in the back with a kitchen knife, it feels like you’re watching the bloodiest modern dance performance of all time. When Arya Stark does the same thing in Game of Thrones it’s just … well, actually, that was pretty badass too. (Go Arya!)

But what really sets Barry apart is the humor, and even a blood soaked episode like “ronny/lily” slips in some amazing jokes. Barry and Fuches’ utter disbelief at Lily’s abilities leads to increasing confusion and comedic terror, as the young girl scales a tree as if it was a step ladder before perching on her roof like a “gargoyle,” Fuches says. (He and Barry are in his Jeep Cherokee, attempting to catch and possibly kill Lily after she sees Barry’s face and escapes.)

In another scene that’s equally jarring and comedic, Fuches attempts to heal a large, gaping stab wound on Barry’s back by rubbing super glue into it. Moments later, he reveals that he’s glued his own hands to the steering wheel.

There’s no shortage of amazing moments (gory, hilarious, or somehow both) in “ronny/lily,” but at this point, you should probably just watch the episode for yourself. Then go back and watch the entire series. You’ll need something new to obsess over after Game of Thrones ends in three short weeks. Good news: Barry’s already been renewed for Season 3.

Barry airs Sundays at 10 p.m. Eastern on HBO, right after Game of Thrones.

More like this
Entertainment
6.21.2022 1:00 AM
Game of Thrones sequel could ruin the best part of the series finale
By Alex Welch
Culture
6.27.2022 1:30 AM
Who is Christina in 'Westworld' Season 4? Evan Rachel Wood explains her "new" character
By Mónica Marie Zorrilla
Entertainment
6.24.2022 2:00 PM
Westworld Season 4 fixes the worst thing about Season 3 — but is it too late?
By Mónica Marie Zorrilla
Share: