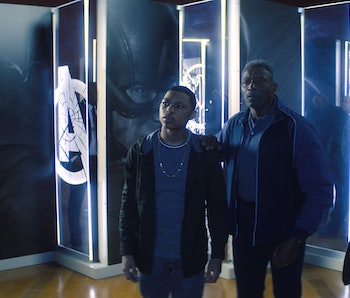 The Marvel Cinematic Universe is in an all-new, all-different phase of pop culture domination. That includes the next generation of heroes who are slowly but surely joining the MCU in nearly all the new Disney+ shows. Some day soon fans will behold the “Young Avengers,” And you can count one character in The Falcon and the Winter Soldier among their ranks.

What Happened? — On Friday, the second Marvel series on Disney+, The Falcon and the Winter Soldier, aired its finale. Actor Elijah Richardson, who appeared in the series in the supporting role of “Eli Bradley” — grandson of Carl Lumbly’s Isaiah Bradley — shared on Instagram a slideshow of pictures of himself onscreen with Lumbly from the show’s finale.

In his Instagram caption, Richardson tweeted: “This may only be the beginning of Eli Bradley!”

Beginning of Patriot — As we’ve previously written when Richardson’s casting was still a rumor, “Eli Bradley” is a character from the comics who has operated under the superhero name of “Patriot.” He is the second individual to do so after Jeffrey Mace, who has also appeared in the Marvel TV series Agents of S.H.I.E.L.D. (played by actor Jason O’Mara).

Debuting in 2005’s Young Avengers #1 (and unmasked in issue #3), Eli is the grandson of Isaiah Bradley who was one of many Black test subjects of the Super Soldier serum. While Eli didn’t inherit any superpowers from his grandfather at birth, he did end up getting powers after using an illegal street drug: Mutant Growth Hormone, which grants users temporary powers. After a blood transfusion with his grandfather, he permanently inherits Super Soldier abilities.

Could the official title of Avengers 5 actually be Young Avengers?

The Inverse Analysis — Admittedly, a lot of this is just speculative guessing. Elijah Richardson’s Instagram post is mostly just an 18-year-old actor relishing having a role in the MCU, a film franchise he likely spent his teen years watching with as much passion and enthusiasm as his friends. Still, because his role has a lengthy history as a superhero in the comics, it’s not hard to see where the MCU is going. Even if it’s not visibly apparent right now.