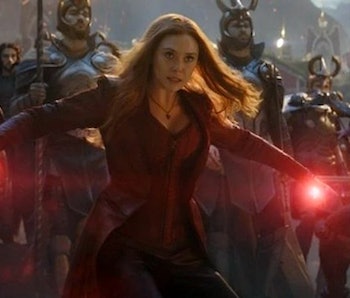 The Marvel Cinematic Universe may be in flux, but at least WandaVision is on track to premiere before the end of the year. The highly-anticipated show is speculated to be a major launching pad for MCU’s Phase Four. It’s also possible that WandaVision will see the return of an old foe so dangerous that his nefarious plans will carry over into the currently unscheduled Avengers 5.

One of the biggest mysteries surrounding WandaVision ahead of the show's Disney+ premiere is how Scarlet Witch landed in the middle of an altered TV sitcom world with Vision back from the dead. The show’s trailer suggests that only Agatha Harkness, a powerful witch who works alongside Wanda in the comics, is aware that something’s not right. However, Agatha’s involvement may reveal that the cosmic villain Dormammu is behind the trippy altered state of Wanda’s world.

MCU fans will remember Dormammu as one of the villains from Doctor Strange. In the final confrontation, the sorcerer used the Eye of Agamotto to trap Dormammu in an endless time-loop unless he gave up his plans to conquer Earth. In the film, the villain had a big, gassy head and, while the battle was exciting, fans were ultimately disappointed by how minuscule a role Dormammu had to play.

The comic-book version of Dormammu is a far more menacing tyrant, constantly trying to take over Earth, just because he can. First introduced in 1964’s Strange Tales #126, the supervillain is an ancient entity who can manipulate anything having to do with magical energy, can teleport to different dimensions, and rules a realm called the Dark Dimension.

His primary run-ins are with Doctor Strange, but the Lord of Chaos is so powerful that Scarlet Witch has been called in at various points to aid in his defeat. At one point, Dormammu’s attempts to capture the Evil Eye, an artifact that allowed him to merge his universe with Earth’s, are thwarted by Wanda. As revenge, he kidnaps her and Agatha during her wedding to Vision, but they both come up with a plan to prevent his regeneration. However, considering that he’s immortal, Dormammu’s defeats typically end in his banishment from Earth, but he’s never gone for long.

Dormammu could have a hand in the bizarre events of WandaVision. Perhaps he’s decided to trap the one person whose witchcraft is as strong as his in an endless sitcom scenario. With Wanda, Agatha, and their magic out of the way, Dormammu can get up to whatever he wants in the meantime. It’s also possible that his return will be what connects the Disney+ series to the plot of Doctor Strange in the Multiverse of Madness. After all, it can’t be a coincidence that Scarlet Witch will appear in the film and Dormammu is one of the biggest villains they have in common.

Like Thanos, Dormammu has his plans laid out in advance so his return may carry into other MCU projects. Scarlet Witch, Agatha, and Doctor Strange may very well defeat him, but it’s possible that Dormammu’s tyrannical plans will resume in time for Avengers 5. He’s such a powerful villain — with abilities that include time travel, astral projections, healing, super-strength, and massive energy blasts — that it might take the Avengers’ collective efforts to send him packing for good.