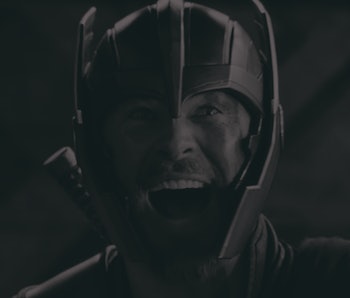 Avengers 5 may be still in early development, but there's never a bad time to look at the comics for inspiration as to where the Marvel Cinematic Universe can go from here. Now that Thanos has been vanquished, it's difficult to imagine an enemy more treacherous, but perhaps the gateway to the next Marvel villain is hiding in plain sight.

Thor: Ragnarok was quite the departure from the standard run of Marvel movies, but its lighthearted tone and colorful cinematography provided a great excursion for Thor and the Hulk. However, the undeniable highlight of the movie was the charismatic foil the Grandmaster, played with equal amounts of charm and smarm by Jeff Goldblum. With his acting chops, he could definitely return in a more villainous role in Avengers 5, but he'd need someone else to provide extra stakes, someone who could rival Thanos.

That's where the comics come in.

In 2016, the Grandmaster (originally known as En Dwi Gast) was featured in a run of comics entitled Avengers: No Surrender. In this story, he had to settle an old beef with a friend, who he thought he vanquished eons before. This friend, one of the Elders of the Universe, had the name "The Grandmaster" first, but was challenged by a younger En Dwi, who took the name and banished his enemy.

In No Surrender, this former friend re-emerges under the name The Challenger and, aptly, challenges his old friend to a rematch. The Grandmaster accepts, and each elder assembles a team, the Grandmaster forming the Lethal Legion and the Challenger forming the Black Order. They decide to battle it out on Earth, which, needless to say, does not go over well with the Avengers, who must defend the planet from two supervillains only concerned with dibs on a mediocre nickname.

No Surrender would make the perfect basis for the next Avengers movie for a number of reasons. Firstly, a villain who doesn't really care about the destruction of the human race would be a breath of fresh air, and two villains would be twice the threat.

It also could introduce a new superhero trope yet to be explored in the MCU. In Avengers: No Surrender, the heroes are joined by a new ally, Voyager. She seems to be a founding member of the Avengers, but it's revealed she's actually Va Nee Gast, the Grandmaster's daughter. The memories of Voyager were inserted into the Avengers' memories as a way to establish trust. A Benedict Arnold turn like this, combined with memory manipulation, would be the perfect plot twist for a flagship Avengers film.

It would be relatively out of character for the Marvel universe to be inspired by a comics run newer than the MCU itself, but it's hard not to want this movie adaptation on the big screen. Just as the comics used the old art style to insert Voyager into the Avengers' past, the MCU could use CGI to place Voyager into footage of past movies. (Imagine if Avengers 5 begins with a new team member that everyone pretends has been around forever, and when they pull up footage from the Battle of New York she's there too!)

Plus, Jeff Goldblum would get a chance to stretch his evil muscles again, and that's an opportunity that Marvel shouldn't pass up.