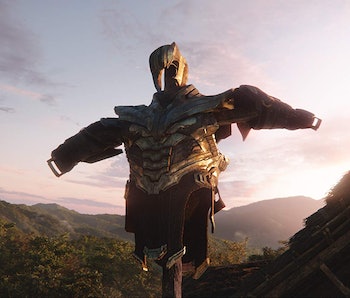 Avengers, assemble ... eventually. Marvel Studios have unleashed a ton of information about the future of the Marvel Cinematic Universe over the past couple of years. That includes a full timeline of Phase Four movies and shows leading to the middle of 2023, but little to no information about Phase Five or, more importantly, the next big superhero team-up movie we might as well call Avengers 5.

Among the films in Phase Four include Black Widow, The Eternals, Shang-Chi and the Legend of the Ten Rings, Doctor Strange in the Multiverse of Madness, and Thor: Love and Thunder. Additionally, there are over a dozen Disney+ series, including The Falcon and the Winter Soldier, WandaVision, Loki, What If…?, and Hawkeye.

There’s even more on the horizon for the yet-to-be-announced Phase Five. But how will that lead into an all-encompassing conflict for the fifth Avengers movie? Here’s everything we can surmise about Avengers 5, who will be involved, and when it might finally hit theaters.

Avengers 5 is not firmly on Marvel Studios’ calendar just yet, but we think it’ll probably happen during Phase Five. So far, Marvel Studios has announced films all the way through May 5, 2023 (with Guardians of the Galaxy Vol. 3). However, there are still three dates that the MCU has booked without movies attached in 2023: July 28, October 6, and November 10. Given that previous Avengers films have been summer releases, it’s possible we could be seeing Avengers 5 on that July 28 date.

We’re barely into Phase Four yet, so there’s no way to predict what might happen in Avengers 5. Marvel Studios was secretive about the Avengers: Endgame title for a long time, so they’ll likely do the same to avoid early spoilers.

Who is returning for the Avengers 5 cast?

Iron Man, Black Widow, Captain America, and Hawkeye are all dead or retired. Bruce Banner/Hulk is the only one who is still around. Even then, he’s permanently injured after using the Stark Infinity Gauntlet to resurrect everyone who died in the Decimation. Thor is currently off with the Guardians of the Galaxy, so that group could always make an appearance — but they’ll probably just return to the Andromeda Galaxy to do their own thing.

Ms. Marvel, She-Hulk, and Moon Knight will also join the MCU in the upcoming Disney+ series, but it’s unclear how they’ll fit in with the Avengers.

Will the Young Avengers be involved in Avengers 5?

As mentioned above, there’s a large question mark as to who the new Avengers will be exactly. But could it be possible that we won’t be getting New Avengers, but Young Avengers?

In Phase Four, Marvel Studios has made an effort to introduce several characters who were part of the Young Avengers in the comics. WandaVision debuted young Billy and Tommy (a.k.a. Wiccan and Speed), though the characters were “killed off” in the finale. The Falcon and the Winter Soldier introduced Eli Bradley, though without the super soldier powers to make him Patriot. Hawkeye will debut Hailee Steinfeld’s Kate Bishop, who will succeed Clint Barton. And Cassie Lang (who inherited her father’s power set and went by Stature in the comics) seems to be playing a larger role in the upcoming Ant-Man and the Wasp: Quantumania, to the point of being recast.

Could all of these introductions mean some form of the Young Avengers will come together to take on a new threat in Avengers 5? And who will that new threat be? On that note...

Who will be the villain in Avengers 5?

Avengers 5 has a tough act to follow in many ways. How do you create a nemesis that lives up to the likes of Loki, Ultron, and Thanos? That question is currently unanswered, but we may have an idea of who the next big bad is.

In September 2020, Johnathan Majors (Lovecraft Country) was announced to be cast in a lead role in Ant-Man and the Wasp: Quantumania. Later that year, it was confirmed he would be playing time traveler Kang the Conqueror. Many have been speculating if Kang will go on to become the main antagonist for the Avengers with that role. After all, the character was a thorn in the side of Earth’s Mightiest Heroes in the comics. Though he lacks the setup of Thanos or the pure charisma of Loki, there’s a good chance Kang could become the next big villain for whatever version of the Avengers we see.

Avengers 5 is expected to release at some point in Phase 5.

This article was originally published on Aug. 28, 2019