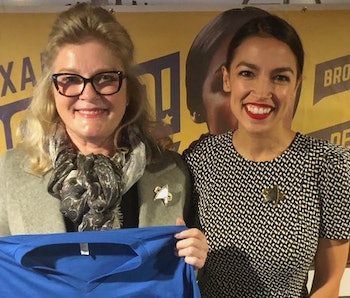 Some of the most influential progressive politicians — from Cory Booker to Stacey Abrams — are massive Star Trek fans. Since the 1960s, the Trek franchise has consistently leaned left in its humanist vision of the future, a fact which Martin Luther King personally cited as relevant to the Civil Rights Movement when he encouraged Nichelle Nichols to stay on the show in the 1960s. In 2020, various Star Trek fan groups united to raise money for Black Lives Matter, and the CBS-owned Star Trek brand then followed suit.

Now, as the nation waits to learn the outcome of the 2020 Presidential Election, New York Congresswoman Alexandria Ocasio-Cortez has reminded her followers that this trying moment is a prime opportunity to be more like Captain Janeway (Kate Mulgrew) from Star Trek: Voyager. Here's why AOC makes a darn good point.

AOC has never been shy about her love of Star Trek, specifically Janeway's influence on her when she was younger. Mulgrew and AOC posed together wearing Starfleet badges from the Voyager era, with Mulgrew noting, "We need more candidates like Alexandria."

A 2020 profile in Vanity Fair notes AOC's entire family is "Star Trek–obsessed," and that came across clearly in one of her comments on a November 5 Twitter thread.

"One thing I learned watching Janeway growing up is how leadership means being responsible for working through dilemmas w/ no clear answers. All the easy decisions are made before it gets to the top. Janeway leads w/ focus on her mission - to get her crew home. Thank you Kate!"

Janeway often had to make decisions that no other Starfleet captain had made before, mostly because the situations were brand new. On Voyager, the crew was stranded out of contact with the Federation and Earth. Right now, the 2020 election feels similarly strange and unprecedented. AOC's essentially saying that thinking like Janeway is the best way for everyone to cope. Looking for easy answers isn't the way through a crisis. Patience and clear thinking will always win out in the end.

Although this philosophy is far from a silver bullet for anxious voters feel better, that's also kind of the point. It's a recurring theme throughout the Star Trek franchise — the biggest problems in life can't be solved quickly.

Just a few weeks ago, Stacey Abrams spoke to Paul F. Tompkins and Tawny Newsome on the official Trek podcast — The Pod Directive — and told them that her political inspiration came from Data in The Next Generation episode "Peak Performance." Abrams noted that Data learned the most important part of winning is not to be focused on the final outcome, but figuring out how "to stay in the game."

Star Trek has a unique gift for inspiring and hopeful social commentary in trying times. So, if you're feeling stressed about the election, maybe taking a break for a Voyager binge isn't the worst idea.

Star Trek: Voyager is streaming on Netflix and CBS All Access.