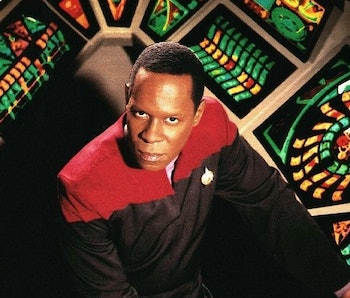 Martin Luther King Jr. was a fan of the original Star Trek, and even encouraged Nichelle Nichols to stay on the show in the 1960s. As Star Trek grew into a media empire, the franchise has striven to be a force for social good almost as much as it tries to be rollicking good science fiction — and its fans are no different.

To support and signal-boost Black Lives Matter and the protests around the world following the murder of George Floyd and other Black Americans by the police, at least nine Star Trek fansites, blogs, and podcasts have joined together to promote a shared message of hope and unity. Here's how it happened.

On "Blackout Tuesday," June 2, 2020, all major affiliates of ViacomCBS went off-air for 8 minutes and 46 seconds of silence. This included CBS All Access, the streaming network home to all current and future iterations of the Star Trek franchise on television. The official Star Trek website posted numerous videos about social justice and Black Lives Matter, as well as clip from the franchise's most powerful statement about race, the Deep Space Nine episode, "Far Beyond the Stars."

Kendra James, editor-in-chief of StarTrek.com, has passionate and specific feelings for how Trek's digital presence should respond to the current social climate.

"I generally dislike the corporate black box statements, because there's work that needs to go on behind those words that a lot of brands who posted them aren't doing," James tells Inverse. "That said, here's what I can say about the work StarTrek.com is putting in behind our statement. I'm a Black woman. I've been given the reigns to set an editorial agenda that gives a platform to Black and other POC writers on a regular basis — and for a genre site no less. We may not be in a position to report on or help solve issues of police brutality towards Black people, but, for our part, we're a site where fans will often be presented with articles that deal specifically with social issues faced by the Black community, and about race, inclusion, people from other marginalized communities, and white privilege in general, and how those things affect Star Trek, Star Trek fandom, and your fellow fans. That means a lot."

This leadership from James inspired much of the Trek online community to respond accordingly. Seemingly overnight, nine fansites and podcasts (that number has grown since then) joined together to circulate a combined statement, which not only presented solidarity with the Black Lives Matter movement but also provided links to specific organizations that support social justice causes. The concept originated in the Star Trek subreddit but was eventually organized by TrekMovie editor-in-chief Anthony Pascale, and then thanks to Pascale, the hashtag #TrekkiesTogether was born.

"If the corporate parent of Star Trek can show some leadership, then it felt like we should do something," Pascale told Inverse. "What happened then was I was pinged by people in the big Star Trek Reddit, and they had gotten eight moderators all to donate to the ACLU. And so I decided we [TrekMovie] would do that, too. But that didn't feel like enough. So, I started emailing people I know."

This resulted in Pascale reaching out to the people behind TrekCore, MemoryAlpha, Priority One, TrekNews.net, Mission Log, Treklands's Portal 47, and Women At Warp. On TrekMovie, Pascale documented how the different sites and podcasts distributed their donations: (TrekMovie focused on donating to the ACLU.)

"Other members of the online Trek community have also been making contributions to groups they support. The Women At Warp team have contributed to the East Of The River Mutual Aid Fund from Black Lives Matter. The TrekCore team has donated to a collection of groups fighting against racism and police brutality. Other outlets in this joint effort doing their part include Priority One, TrekNews.net, Mission Log, Trekland’s Portal 47, and Memory Alpha."

On Twitter, each of these organizations issued the same joint statement, under the hashtag #TrekkiesTogether. This push encourages their readers and listeners, to donate to one (or all) of the causes.

"Star Trek isn’t just about our long-distant future - it’s about building that future," Women At Warp co-host Sue Kisenwether tells Inverse. "We believe that we can’t reach that future without racial justice. Black Lives Matter is at the heart of Star Trek’s message."

"We're pushing against an open door. Most Trekkies are already part of this. The belief in a more diverse and equal future is ingrained into Star Trek and has been part of every show — the new shows, the olds shows, the original show. I think Star Trek fans are appalled at what they are seeing. We all believe in this vision, but we feel like we want to do something to help move towards that and show our belief in a more equal and accepting [future] by embracing of diversity."

Kisenwether also pointed out that Women At Warp had already been posting Black Lives Matter donation links to The East of the River Mutual Aid Fund.

"When Anthony reached out to us on Tuesday, we had already posted links to info on how to support the BLM protestors on our social media outlets, and had all been vocal on our personal accounts as well," Kisenwether said. "But a community effort seemed like a great idea."

For science fiction fans, believing in a hopeful future and actually seeing it come true can be tough to reconcile. Star Trek itself can't summon a more equitable society just by airing new episodes, and fans realize that quoting Ben Sisko or Jean-Luc Picard isn't going to be sufficient.

"Social issues have been at the heart of Trek since the beginning," James says. "Posting articles to [StarTrek.com] is a very small thing in the grand scheme of what's going on, but for me, it means that when we put a BLM statement up, I can take comfort in knowing that there is work happening behind the scenes to back that up. This isn't a week-long fight. Continuous work needs to be happening in all sectors."

Since the #TrekkiesTogether hashtag started, several other podcasts, blogs, and prominent fans have joined in, including Inglorious Treksperts co-hosted by Trek historian and pioneering journalist Mark. A. Altman. Several Star Trek celebrities have supported the hashtag, too, including Discovery's Mary Chieffo and the legendary George Takei.

In some versions of Star Trek's future, money doesn't exist. But for now, at least when it comes to just causes that fight racism, the Star Trek franchise — and its fans — are putting their money where their mouths are.