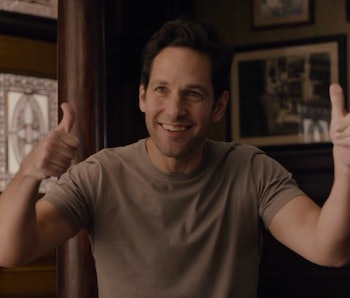 There has been a lot of talk in recent months about the cast of Ant-Man and the Wasp: Quantumania, and it’s easy to see why. Not only is the highly-anticipated Marvel sequel bringing back the Ant-Man franchise’s core cast of characters, but it’s also set to feature Jonathan Majors’ Kang the Conqueror in a major capacity — making its place within Marvel Studios’ mysterious Phase Four plans that much more intriguing.

Rumors are also growing that, in addition to Majors’ Kang, Quantumania will see Corey Stoll making a surprise return appearance as Darren Cross (aka, Yellowjacket). While it’s still unclear whether or not that will actually come to pass, it looks like fans don’t have to wonder any longer about one actor’s rumored involvement in the film.

A Screen Icon — A few weeks ago, the internet was rocked with rumors indicating that none other than Bill Murray will appear in Ant-Man and the Wasp: Quantumania. According to the man himself, those rumors are, in fact, true.

The actor essentially confirmed his involvement in the film during a recent interview with German outlet Frankfurter Allgemeine Zeitung. According to a Google translation of the interview, Murray told the outlet, “You know, recently I made a Marvel movie,” before going on to heavily hint that said movie is Ant-Man and the Wasp: Quantumania.

“Some people were quite surprised why I decided on such a project,” Murray said. “But for me, the thing was quite clear: I got to know the director — and really liked him very much. He was funny, humble, everything you want from a director.”

Murray went on to call Quantumania director Peyton Reed’s 2000 film, Bring It On, “damn good,” essentially confirming that Ant-Man and the Wasp 3 will be the film that sees him making his Marvel Cinematic Universe debut.

However, fans probably shouldn’t expect Murray’s time in the MCU to extend past Quantumania, with the actor adding, “Let’s put it this way: the director is a good guy, and now I’ve at least tried out what it’s like to shoot a Marvel movie. But I don’t think I need that experience a second time.”

In & Out — With these comments, Murray now joins a growing list of esteemed actors, which also includes Spider-Man: No Way Home star Alfred Molina, who have absolutely no problem throwing Marvel Studios’ secrecy policies out the window. And to that, we say, “Bravo. More of this, please.”

All jokes aside, Murray’s involvement in Ant-Man and the Wasp: Quantumania just further cements its place as one of the Phase Four titles that Marvel fans should be paying close attention to. He’s one of the most recognizable American film stars of the past 50 years — if not ever — and is one of the few high-profile actors who has managed to totally avoid appearing in the MCU up to this point.

Of course, that doesn’t inherently mean he’ll have a major or important role in the film. After all, he goes out of his way in the interview to say that it was his opinion of Peyton Reed that convinced him to join Quantumania — not necessarily the quality of his character. Murray’s willingness to say that he likely won’t appear in any other Marvel movie also suggests that his role in the film will likely be more tied to the plot of Quantumania than the wider MCU.

The Inverse Verdict — For what it’s worth, this writer remains of the opinion that Bill Murray will appear in Ant-Man and the Wasp: Quantumania in a fun but relatively unimportant supporting role. His remarks about his collaboration with Marvel already being over even, notably, raise the possibility of his character dying by the time the film’s credits roll. Alternatively, it’s possible his character will survive the events of Quantumania, but Murray just won’t ever return to reprise the role.

At this point, it’s difficult to say who Murray is playing in the film, or how important his character is to the film’s overall plot. Odds are, we’ll have to wait until Ant-Man and the Wasp: Quantumania hits theaters to find out the answers to those questions as well. But at least Marvel fans no longer have to wonder about whether or not Bill Murray is in the film — even if the details of his involvement remain shrouded in secrecy for the time being.