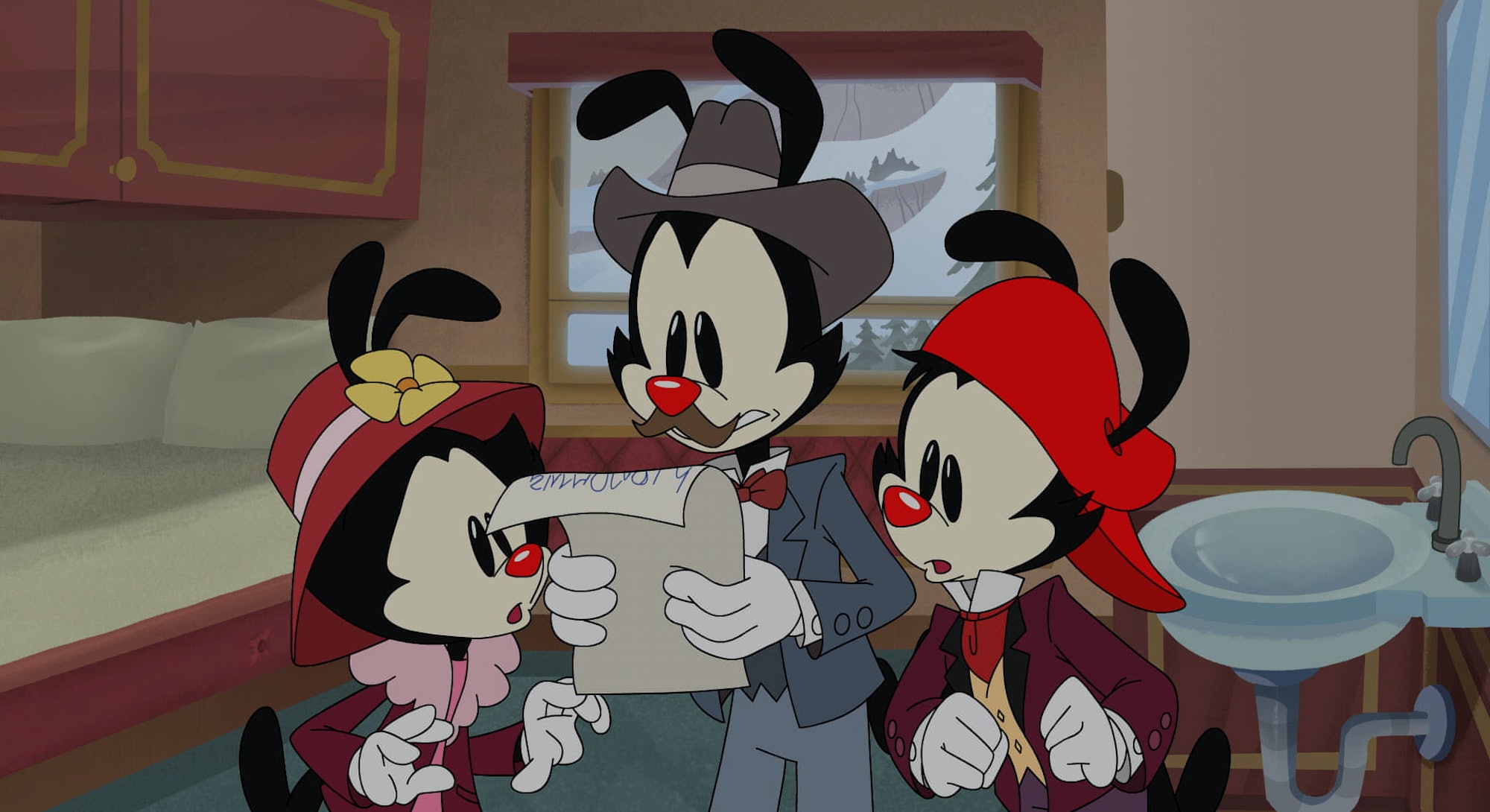 They’re the Animaniacs, and you should see their new contracts.

Twenty-two years after Animaniacs went off the air, the cultural satire disguised as a slapstick musical cartoon is back, this time on Hulu. While the world of 2020 is different from 1998, a comically poignant point Animaniacs (and Pinky and the Brain) makes is how little things actually change. You won’t believe how much mileage they still get with Bill Clinton on the sax.

Still, the Animaniacs — talkative Yakko, belching Wakko, and sassy sister Dot — enter a world they don’t recognize, and they’re just a little terrified. As they sing in their opening number: “What’s going on? Will we be okay? Has it all gone mad since we went away?”

But while the world is different, the Animaniacs remain the same avatars of chaos with mallets and pies in their back pockets. Original series stars Rob Paulsen, Jess Harnell, and Tress MacNeille reprise their roles in the revival as Yakko (and Pinky), Wakko, and Dot, respectively. Plus Maurice LaMarche as the ambitious lab mouse, Brain.

“Animaniacs was always a kid’s show masquerading as a social satire.”

“At its heart, Animaniacs was always a kid’s show masquerading as a social satire, masquerading as a Broadway musical,” Harnell tells Inverse. “The difference between the old show and the new [is that] the situations have changed drastically. Think about the things we’ve seen since 1998, how much new stuff there is to poke holes.”

YouTube! Uber! Global warming! Gun control? “We do a show about ‘bun control,’” Harnell says, “It’s about controlling bunnies. There’s this guy with bunnies and they’re everywhere. It’s only at the end when there’s cute bunnies that someone has to initiate better bun control.”

In another episode, the Warner siblings head to Russia to investigate a Soviet-knockoff of their show, including a USSR-inspired take on Yakko’s famous nations of the world song. Meanwhile, Pinky and the Brain weaponize internet virality in an attempt to, well, you know.

Don’t get it twisted: Animaniacs is still the wacky, colorful cartoon adults and kids can enjoy. But its enduring popularity and place on a premium streaming service — free from TV content guidelines — means it can be just a little more fearless than it was in the after-school scheduling block.

“Success breeds permission,” Harnell says. “When Animaniacs started, it was harder to get away with. We were a cartoon Trojan horse. We were disguising the real intent of the show. As the show became successful, Warner Bros. and Fox Kids embraced it.”

Fast forward 20 years later, Harnell says Hulu recognized what made Animaniacs work. “Hulu knew. We cannot weaken this. If anything, we make it more sardonic and edgier to take it to the next level.”

Harnell adds that the show does see “a fine line” between being edgy and being mean, “and we don’t want to be mean.” “There’s enough of that going around,” he says.

“We do poke fun at things that could use a wink, and Hulu let us do that.”

More surprising than an Animaniacs sans kid gloves is the deep involvement of executive producer Steven Spielberg. (Tom Ruegger, the original creator, is not involved with the revival.) The acclaimed director has also recruited Wellesley Wild, a veteran writer and producer of Family Guy, and producers Gabe Swarr and Tom Minton to oversee the Animaniacs’ return.

“Steven is involved, and way more we thought he would be,” jokes Harnell. “He approves every script, every new character art, every song, all the voice recordings.”

“Mr. Spielberg went to every pitch in person.”

It was Spielberg who personally pitched the show to streamers like Netflix, Amazon, and Apple. Armed with oversized headshots of the cast, the director stipulated their return or else there’s no show.

“Mr. Spielberg went to every pitch in person,” says Rob Paulsen. “He took blown up, two foot by three foot photos of me, Maurice, Tress, and Jess, saying, ‘Whoever buys this, these guys are it. They do it better than they used to. None of them are too old, it doesn’t matter what they look like. That’s the deal.’ He went to bat for us. That’s how involved he is, on a day-to-day, script-to-script basis.”

“We were a cartoon Trojan horse.”

While an Animaniacs with a celebrity ensemble would have afforded the show star power, it wouldn’t be very Animaniacs. “Spielberg knows this is not about Liam Neeson as the Brain,” says Paulsen, “It’s about the authenticity of the character millions grew up watching.”

2020 is a troubled year ripe for comedy, but fatigued audiences may be relieved to know there’s no pandemic parody. As the show even acknowledges (mid-riff on Donald Trump, no less), the first season began production in 2018, and they could only guess who would win the 2020 election. There’s an Olympics episode the writers planned for the summer games in Tokyo, which didn’t happen. But Harnell thinks a third season (the show is greenlit for two) will give the siblings some studio-branded face masks.

“Most of the topics we do, even though they’re of the moment, you can look back later years and go, ‘I remember that going on,’” Harnell says. “I have a feeling we’ll be doing a Season 3, and when we do, I believe the Warners are wearing face masks. Even if Covid is over, let’s face it, these memories aren’t going away. This year is going to stick with us long after 2020 is over.”

Animaniacs will be released on Hulu on November 20.