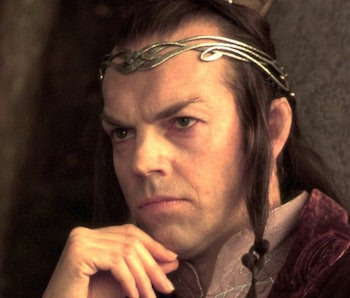 Fortunately, the few characters who are expected to appear in the Lord of the Rings TV series all promise to be power players in the show’s story, and may act in ways that will no doubt surprise fans of Jackson’s film trilogy.

That includes Elrond, the Lord of Rivendell.

The Theory — Up until this point, Amazon has held off on releasing very many details about its Lord of the Rings series, so most of what fans say about the series is still speculation for the time being. But many believe — justifiably — that the Lord of the Rings TV show will feature a younger version of Elrond (played by Hugo Weaving in Peter Jackson’s LOTR and Hobbit films).

Elrond is one of only a few Tolkien characters who was alive throughout the entirety of the Second Age of Middle-earth, which means he could appear in the series no matter what period of the Second Age it takes place in. Elrond also played a pivotal role in the major conflict of the Second Age — a role very much unlike the one he played in the Lord of the Rings and Hobbit films.

Elrond the Warrior — Elrond was one of the key players in the fight against Sauron that took place during the Second Age. For starters, according to Tolkien, he was one of the only Elves who was unconvinced by Sauron when the Dark Lord was masquerading as Annatar, the Lord of Gifts. He also served as a captain and herald to Gil-galad, the High King of the Elves of the West, and following an initial conflict with Sauron, founded Rivendell, which remained a stronghold against Sauron’s forces throughout both the Second and Third Ages of Middle-earth.

Elrond didn't just defend Rivendell for years against Sauron’s army though, he also took up arms against Sauron throughout the Second Age. Eventually, his time on the battlefield culminated in the Last Alliance of Elves and Men, where he fought alongside Gil-galad in the battle against Sauron that concluded with Isildur cutting the One Ring from Sauron’s finger.

So not only did Elrond work the Elves and other races of Middle-earth in standing against Sauron — but he was also a major player on his own in the conflict.

Despite that, there are only a few moments in the live-action Lord of the Rings films when Elrond’s battle prowess is shown/hinted at (see: the prologue of Fellowship of the Ring and one climactic scene in The Hobbit: The Battle of the Five Armies). Otherwise, the character’s military experience is, for the most part, left unseen in the films, which leaves the Amazon series with plenty of room to deliver on that front.

The Inverse Analysis — Elrond is one of a few characters from the Lord of the Rings trilogy rumored to be in the Amazon series. Galadriel is also said to be in the TV show, as is Sauron himself, and many fans believe the latter will be taking on a much different form than the one he did in Jackson’s film trilogy. That will, no doubt, be the case for Elrond as well, who could be much more involved in the show’s central conflict than he was in the War of the Ring.

Indeed, Lord of the Rings fans may not be far off from getting to see Elrond kick some serious butt on the battlefield.