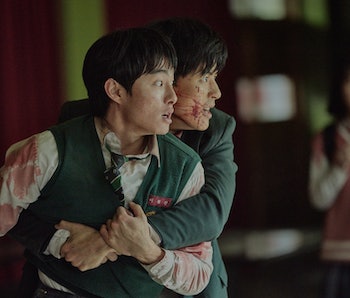 With 124.79 million viewing hours in its first week, All of Us Are Dead established itself as Netflix’s next hit and one of its most-viewed premieres. The South Korean zombie series follows a group of students trapped in their high school as a zombie outbreak turns their world upside down.

The show is barely a month old, but we’re already excited about the potential of a second season — and we’re not the only ones. Director Lee Jae-kyoo has made it clear he hopes for a second bite, telling The Korea Herald, “Many directions, settings, and scenes were intentionally produced to expand the story into an additional season.”

The prospect of Netflix renewing All of Us Are Dead for another outing has us thinking about all of Season 1’s lingering plot threads. From whether Cheong-san survived to if there could be a cure for the zombie virus, here are six unresolved questions Season 2 will need to answer.

Warning! All of Us Are Dead Season 1 spoilers ahead.

After Cheong-san (Yoon Chan-young) ostensibly sacrificed himself to dispose of hambie (half-human, half-zombie) bully, Gwi-nam (Yoo In-soo), the final episode of Season 1 opens on a body we assume belongs to Cheong-san. Later, when the group return after the bombing of Hyosan, Nam-ra (Cho Yi-hyun) says she cannot smell anyone. But is Cheong-san really gone?

Sometimes when a character meets their demise, it isn’t necessarily final. Lee Jae-kyoo told Wikitree, “I do have a vague picture that I drew out, imagining what would happen if all the other actors, including Cheong-san, were to appear in Season 2.” That suggests he wants the character to return. Moreover, he said Season 2 would introduce “new races of zombies - immune and immortal.” Cheong-san could be our introduction to one of these new categories of the undead.

When On-jo (Park Ji-hun) spies a fire burning on the school's rooftop, she and the surviving students break out of quarantine to fulfill a promise she made to Nam-ra — that they would sit around a fire together again. Sure enough, Nam-ra is waiting for them. She’s healed since we saw her last, looking almost human. But she maintains she is not, nor is she a monster. When On-jo asks her to return with the group, Nam-ra declines. She has to look after others like her.

Shortly after, she leaps from the roof to join her new cohort. But who are the others? We can likely expect familiar and new faces following Nam-ra in Season 2.

One loose end from Season 1 asks what happened to Eun-ji (Oh Hye-soo). Last we saw, the governmental leadership had her along with three others infected. All of Us Are Dead thrives on eschewing traditional tropes, and Hyosan accidentally releasing zombies is one of the most clichéd. But what about state-sponsored zombies? With access to Byeong-chan’s research, will politicians use the Jonas virus? Perhaps they will make their own hambie army to clear out Nam-ra’s group.

Wishing his son to be stronger, Byeong-chan (Kim Byeong-cheol) did what any good father would do: infected him with an experimental virus. When Detective Jae-ik (Lee Kyoo-hyung) apprehends him, he lets himself get bitten as the station is under attack. He reanimates not as the crunchy feral zombies we had come to expect. He’s calm, stares straight at the camera, and we never see him again in the present.

Byeong-chan’s mantra that only the strong survive clearly led him to decide to get infected. But his decision raises some more questions. How did he know he wouldn’t become a mindless variant? Did he understand his own will to live would turn him into a hambie? He could appear with Nam-ra in Season 2 or have more nefarious designs for his new strength. The point is, he is likely not gone and could return in a second season.

2. Which couples will get back together?

Much as we rooted for the principal couples, they didn’t make it to the end of Season 1. Nam-ra left Su-hyeok (Solomon Park) to stay in Hyosan while Cheong-san ostensibly perished in the bombing. It’s hard to find love at the best of times, so it’s not such a shock that it was difficult for the kids to maintain their relationships while everyone around them died. But we hope Season 2 can bring some resolution to these relationships because Cheong-san and On-jo kissing made us shed a tear or two.

1. Is there a cure for the zombie virus?

We know so little about the virus that it’s something Season 2 would need to address. Season 1 revealed that willpower plays a part in how someone reacts to infection, but how can a virus like that be treated? With hambies remaining in Hyosan and possibly infected animals, too, it's almost certain that Season 2 will include the virus spreading outside of the initial outbreak zone. This is bound to become a more significant problem, and a cure seems like the best solution, one that ensures the most survivors.

Hopefully, if All of Us Are Dead does return, these questions and more will be answered in a new season that is just as action-packed and exciting as the first.

All of Us Are Dead Season 1 is now streaming on Netflix.