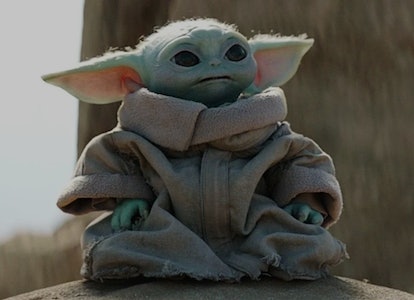 Robert Rodriguez is having a big year. First, he directed arguably the most action-packed episode of The Mandalorian's second season, then, Disney announced a Book of Boba Fett spinoff with Rodriguez as a producer. And now, he's releasing We Can Be Heroes, a boisterous new superhero movie inspired by his underrated classic Sharkboy and Lava Girl out on Netflix on December 25.

But his highlight for 2020 might be getting to work with Baby Yoda.

"It is amazing," he says. "It's amazing because the artists that bring it to life don't let it just sit idle in between takes. They're constantly honing their craft. So it feels like there's something right there alive even in between takes, which I thought was really smart."

He continues: "When you show it to little kids they go, Baby Yoda’s alive? because when you see behind the scenes doing these things and you realize this thing is like a real actor. It's not just a creature or puppet."

Next up in the Star Wars universe, Rodriguez is signed on as a producer on The Book of Boba Fett, a Mandalorian spinoff premiering in December 2021 on Disney+. The director was tight-lipped about his plans for the galaxy's most fearsome bounty hunter — "Hey man, it’s Star Wars. I can't talk about that. You sign your rights away" — but he did admit that directing Boba Fett felt like the opportunity of a lifetime.

"I was a huge fan," Rodriguez says. "He came out when I was 12 years old. That's the dude. I couldn't believe I even got to work with that character."

Beyond Star Wars, Rodriguez is also eyeing another potential sci-fi franchise: Alita: Battle Angel. The 2019 manga adaptation with a screenplay from James Cameron has built up a devoted fanbase in the year since it's release. However, Rodriguez says the fate of a possible sequel is up in the air after 20th Century Fox was acquired by Disney — even if he and Cameron are both keen to make Alita 2:

"I’d love to make the sequel. I've just been busy with this stuff, and Jim's just getting back from New Zealand. But yeah, we'd love to explore that. You know, Fox got bought by Disney, and I’m not sure what they're doing with it yet. It's kind of the wrong time to ask people, with everything that's going on in the world. It’s hard to know. The studio was just bought up right after Alita was coming out. So I’m not sure what type of movies they're making. Who knows what the future of that studio is where they're where the property lies. I would love to make a sequel. And Jim would love to make a sequel."

Another Fox-Rodriguez venture currently in limbo? Escape from New York. In the past, the Sin City director has been attempted to plans for a potential reboot, though he's never actually confirmed those reports. Unsurprisingly, he continued to deflect when asked about the current status of the project.

"Yeah, same thing there," Rodriguez says. "It's a Fox Film. We’re not sure quite what’s in store for Fox yet or their properties."

Finally, we couldn't let Rodriguez go without acting about possibly his most famous work: Stab. The movie-within-a-movie that opens Wes Craven's Scream 2 has long been credited to Rodriguez. However, the director took the opportunity to set the record straight once and for all: Robert Rodriguez did not direct Stab.

"Wes is a friend of mine. The great Wes Craven. Such a sweetheart. He did all of that. He asked if he could use my name in there, which I thought was such a great honor. But I didn’t film that. But I got credited for it. I was at the premiere and people were turning to me to go, 'Wow that was amazing!' And I was like, 'Yeah, thanks, but actually, I didn’t shoot it. Wes did.' So Wes did that too, and he kind of did it in a cool exploitation kind of style. He was just a master. So I was very associated with that, but I actually did not shoot it. That's all Wes. I wish I could shoot that. He shot it much better than I would."

You can check out Robert Rodriguez's latest movie, We Can Be Heroes, on Netflix starting December 25.