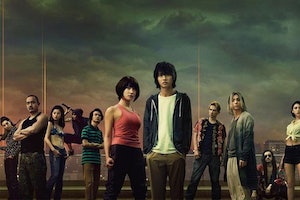 'Alice in Borderland' Season 2 spoilers: 5 huge reveals from the manga

It can be hard to know what to expect from international TV. Some shows wouldn't be out of place on HBO or AMC. Other series feel more idiosyncratic, like Korea's Chef and My Fridge. Netflix's new Japanese series Alice in Borderland definitely seems to be in the former category, capturing audiences with its grown-up Hunger Games-meets-Ready Player One action and intrigue.

The show's first part finished on a huge cliffhanger. Here are five pivotal moments to expect from Season 2, based on the original manga.

MAJOR spoilers for Alice in Borderland Season 2 ahead.

Alice in Borderland Season 1 was surprisingly faithful to the original manga. The character designs are similar, and the plot hits all the same points. Therefore, Season 2 will probably take the same cues from the source material, meaning the entire rest of the story is available already.

But beware, the shocking answers will change everything about how you look at the show. Really, this is a Lost-caliber reveal.

Last we saw our hero Arisu and his comrades, they had just collected all the numbered cards in the mysterious game. That spurred on the release of 12 blimps, each of which held a giant banner displaying a face card. Each of these blimps represents one of the final 12 games, all higher in difficulty than the ones that came before.

In the manga, these games included a tactical battle royale against a nudist, a mahjong game, a number guessing game, a possibly endless game of trust with a traitor, and a never-ending, boundless game against a ruthless sniper. Basically, everything is turned up to the max, and everyone's specialties are tested to the extreme.

Arisu and climber's daughter Usagi have had a close relationship since they first played tag together. But Season 2 will see them finally define their relationship and how it relates to the game at large. True love and masterminded battles to the death rarely mix, just ask Peeta and Katniss.

Just like any good story, Arisu will have to reach rock bottom before he can triumph again. If Season 2 follows the manga, this means he'll completely stop competing in games altogether because of another loss of someone close to him. Speaking of that loss...

Sorry, Tatta. Your sweet mechanic smile is not long for this world. In the manga, the first face card the ex-beach crew (and a somewhat-redeemed Nigari) take on is the King of Clubs, a tactical points-based battle game. It's team-based, so all five take on five residents of Borderland, associates of the King of Clubs himself.

All seems to be going according to plan until a surprise tactic almost dooms the players to death. Fortunately, Tatta had a plan — slice off his hand so Arisu could take his point-tracking bracelet and win the game. It works, but not without a price. Tatta bleeds out, sending Arisu into yet another survivor's guilt spiral.

Season 1 exposed the "Game Master" to be Mira, an executive of the Beach. If Season 2 is anything like the manga, that won't be the last we see of her. Mira is actually the Queen of Hearts, and poses as the last obstacle between Arisu and collecting all the cards needed to secure a spot in the real world.

The game is simple — play three rounds of croquet with Mira without forfeiting. It doesn't matter who wins, as long as three rounds played. But this is a hearts game, so there's a terrifying psychological twist.

Arisu goes into the final game with only one agenda — answers. He asks Mira what the Borderland is on a number of occasions. First, she says it's a virtual reality resort for an ultra-advanced human race who have learned to live in complete perfection but crave suffering. The prize for winning is being able to stay longer and design more games.

Then, she says that's a lie.

Next, she says it's all a hallucination caused by the trauma of seeing his friends get run over by a train after hanging out with his friends they day they were sent to the Borderland. He couldn't accept the fact he couldn't help them, so he manufactured this entire world to cope. Mira is actually his psychiatrist. It's at this point Arisu realizes only one part of this is actually true — he's been drugged.

After a fight for sanity, Arisu manages to win the game, meaning all players are given the choice between staying in the game for eternity, or leaving for the real world. Arisu and Usagi opt to return to the real world, and the true twist of the Borderland is revealed...

All players in the Borderland were victims of a meteorite attack on Tokyo.

Yep, every single one of the characters we know and love were somehow injured by chunks of space rock. Those who opted to return were told their hearts stopped for an entire minute, meaning the entire timespan in the Borderland lasted only a minute of real-time.

Will the Netflix series stick with this explanation? If not, they've got two alternate plot twists already baked in. Thankfully, we will eventually find out — Alice in Borderland has already been renewed for a second season.

Alice in Borderland Season 1 is now streaming on Netflix.

More like this
Entertainment
5.18.2022 7:00 AM
Stranger Things cast unpack a "quite metaphorical" Season 4
By Eric Francisco
Entertainment
19 hours ago
'Umbrella Academy' Season 3 release date, trailer, cast, and plot for the Netflix superhero series
By Mae Abdulbaki and Mike Bloom
Entertainment
5.18.2022 9:36 PM
Kate Siegel says Netflix’s Fall of the House of Usher is “like nothing anyone has ever seen”
By Dais Johnston
Related Tags
Share: