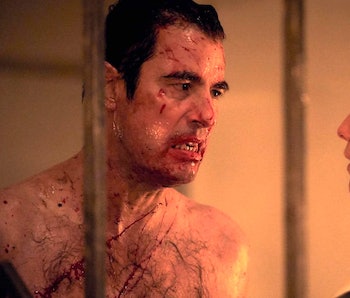 If there’s one thing everyone knows about Count Dracula, it’s that he always comes back. So does that mean the latest incarnation of the Prince of Darkness will return for Dracula Season 2 from Netflix and the BBC? If you’ve already watched the three-part miniseries, you know it doesn’t exactly set up a sequel. Still, a closer look at the plot of Dracula and the previous work of creative duo Mark Gatiss and Steven Moffat reveals a few different ways it could happen.

Intrigued? Let’s dive in. But don’t forget to bring a cross and some garlic, just in case.

Warning! Spoilers for Dracula below.

Will Dracula be renewed for Season 2?

Let’s get this out of the way. Dracula has yet to be renewed for Season 2. But Mark Gatiss and Steven Moffat had expressed interest in continuing the adventures of the titular vampire in February 2020.

“Apparently, if you pour blood onto Dracula’s ashes, he comes back,” added Gatiss. “Who knows Dracula tends to come back, that’s what vampires do – but we have no idea [if the show will return].”

When will Dracula Season 2 stream on Netflix?

Let’s get this out of the way. We don’t know when exactly Dracula Season 2 will arrive on Netflix. It hasn’t even been officially renewed yet, though it hasn’t been ruled out either.

So based on Sherlock’s schedule, we could see Dracula return as late as January 2023, though again, that’s assuming we get a Season 2 at all.

Is there a trailer for Dracula Season 2?

Nope. Not even close. Expect one in like a year at best, when production could theoretically get underway.

Does the first season of Dracula even set up a Season 2?

Short answer: Not really, since Dracula seems to die at the end of this miniseries.

Long answer: Actually, maybe it does…

For one thing, Dracula doesn’t officially die at the end of Season 1. He just drinks Van Helsing’s blood, which apparently kills him for reasons that I don’t totally understand. On a symbolic level, the two characters seem to be polar opposites destined to fight across time. But again, it’s pretty unclear why, and there’s no reason Dracula has to die. Plus, even if he does, he’s Count Dracula; he can always just come back.

The biggest issue is simply that we learn many of the rules that define the character (and vampires in general) no longer hold true by the end of Dracula. He’s actually totally fine hanging out in the sunlight, and crosses no longer affect him.

Of course, he’s still immortal and drinks blood, but it’s not quite the same. Dracula Season 2 would have to tease out what it means for the character to exist without all those rules. Or, better yet, find a way to bring them back.

Better yet, Dracula Season 2 could instead return to the earlier time and Eastern European setting of the first two episodes — which are way better than the Season 1 finale that takes us into modern England. The show seems to run out of steam after Dracula arrives in present-day London, simultaneously trying to do too much in one episode and also failing to really explore its full potential.

So as tempting as it is for a follow-up to return to Count Dracula’s more traditional setting, there might be some untapped potential in continuing forward, which brings me to a far-out pitch of my own…

Why Dracula Season 2 should be “Dracula vs. Sherlock.”

Before Dracula, Mark Gatiss and Steven Moffat were perhaps best known for Sherlock, a modern-day adaptation of the famous detective stories starring Benedict Cumberbatch as Sherlock Holmes and Martin Freeman as John Watson. So now that Count Dracula is also hanging out in modern London, why not combine these two characters and create a Gattis/Moffat extended universe?

Think about it: How awesome would it be to watch Sherlock and the Prince of Darkness go toe-to-toe in a battle that pits supernatural powers against super-heroic levels of intelligence and deduction? There’s even a precedent for it in the 1978 novel The Adventures of the Sanguinary Count, which was later adapted into a BBC Radio production in 1981.

The biggest issue here is that Gattis plays both Sherlock’s brother Mycroft in Sherlock and Dracula’s lawyer/servant in Dracula. So a crossover would either have to do a bit of recasting and hope audiences could go along with it, or pull a huge retcon and claim that Gattis’ character in Dracula was actually Mycroft all along working undercover to investigate the vampire.

Now that I think about it, that would be a pretty sweet twist, but none of it will happen unless Netflix and the BBC decide to renew Dracula for a Season 2. Until then, your best bet is probably to rewatch old Sherlock episodes and pretend Moriarty is actually a vampire.