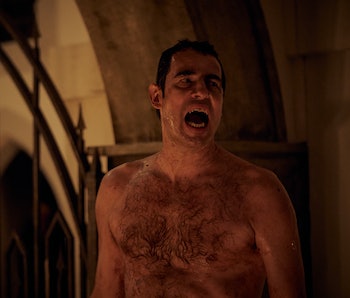 On New Year’s Day, Dracula aired its first of three episodes on BBC One, with the next two airing on January 2 and January 3. Co-produced between the BBC and Netflix, audiences outside the UK will have the chance to delight in Dracula’s horrors when the series begins streaming on Netflix on January 4, the day after the final episode airs on Friday.

Although the show has a considerably short season length, even for British TV, each episode runs at a feature-length 90 minutes.

Dracula is the latest collaboration between Doctor Who and Sherlock showrunners Mark Gatiss and Steven Moffat. It is a semi-modern interpretation of Count Dracula where the famous vampire, played by Claes Bang (The Girl in the Spider’s Web) confronts the descendants of his nemesis, Van Helsing. Dolly Wells (Doll & Em) stars as Sister Agatha, a nun who is of the Helsing bloodline and upholds family tradition as a vampire hunter.

Upon its premiere, Dracula earned some early positive reviews. The Guardian called the series “Fun, smart, scary” and “with just the right whiff of ham,” with critic Lucy Mangan writing:

“It’s a bloodstained love letter to a classic, beautifully and delicately scented with just the faintest hint of ham gothic yarns need; a homage to all the great Counts who have gone before, but still entirely its own thing.”

Anita Singh’s four star review for The Telegraph praises lead Claes Bang as a “masterstroke” whose performance is a subtle audition for the next James Bond. “His Dracula is witty, outrageous and rather thrilling. If the Bond producers fancy a return to the Roger Moore days of quips and quizzical eyebrows, then Bang is their man.”

Daily Mail’s Christopher Stevens reacted positively to the show’s horror elements, calling the series “dripping with more gore than a raw hamburger” and “not a production for delicate souls.”

“There were images of true horror: The broken-jointed corpses climbing out of their packing cases, the hollow-eyed baby lurching forwards to feed on an impaled maiden, and most of all those fingernails… sliding off [Jonathan] Harker’s hands like loose orange peel.”

Reactions from publications outside the UK have yet to surface on the internet. But based on the show’s early buzz, it’s safe to bet that Dracula will work its same dark charms on the other side of the pond.

If you really can’t wait for Dracula to stream a few days from now, you can satisfy your thirst with the anime series Castlevania, where vampire hunter Trevor Belmont (voiced by Richard Armitage) teams up with Dracula’s son, Alucard, to take down the monstrous count once and for all.

Dracula will stream on Netflix on January 4.